Well, the most important thing for that is to tell the details of how to reproduce it, so they can see the bug

The first thing will be to know if happens with any directory (i assume no?) or in such case, see which types of directories (let's say for example, a directory of movie files (large video files), with more than 50 videos)

Optionally could be good if you can try this on a different machine, but I assume its not needed (we are talking about processing files, unless rendering is involved)

Reproducing is the hard thing.
IIRC @IamElive had similar issues but haven't heard from others if they've seen this behavior.

I'll try on some other machines too.
Any idea where EFM caches it's thumbnails? Maybe I could reproduce by deleting them.

The trouble is that EFM is no fun compared to Thunar and I find the "preview" option extremely irritating as more often than not it blocks my view of the directory I'm looking through.

with the exact steps to reproduce, I could try

On opening a window, using EFM it causes "qtdemux" to segfault.....prolly when trying to generate thumbnails from videos.

Here's a screenshot whilst running "tail -f /varr/log/syslog" and opening a directory with videos. 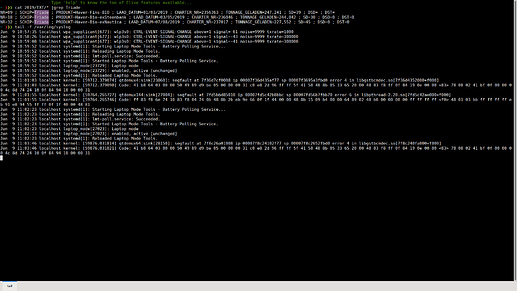 This happens on different laptops ..... so definitely a bug.
@Thanatermesis I will report on enlightenment.org.

I'm testing the last E mainly on the eeepc 1001px (3.7.x upgraded (not from the last 3.8.2 .iso)) and it's generally ok, exept the same problem as in E16 with over screened windows (for e.g. asking where to download a file), witch is a bit more problematic because here the ctrl+alt+mouse is not here... Is there a way to fit it (keyboard pass-thru), or better, to resolve this windows dimensions thing?

How to modify the image of a .edj background (not changing bg but taking a former image, made modif's & using it as a new bg image)?

I always use the right-click in the top window bar and select the "window" option there and then the "resize window" but I agree it's a PITA and puts one off E23 after a while. Browser pop-ups generally wont have borders provided so that will remain a "problem" there.

No, you're stuck with what E23 has on offer, for now ... unless you want to alter the .edj for the theme and add/replace it there yourself.

Of course you're free to not use (or put it elsewhere) "ibar" and startup "cairo-dock" if you want to.

How to modify the image of a .edj background (not changing bg but taking a former image, made modif's & using it as a new bg image)?

The best way is to import the image "again" and provide a different name. The importer will create the required .edj in that case.

Updates from the last Enlightenment version available on the repos

if your update fails, just remove it and install again

BTW I just received a notification about a bug fixed that I reported some time ago, one bug less in E23* !

If I apug, it should show it ? Or I need to do something else
I am using E23 all the time so I am interested in this update, whatever it fixes

apug should do the trick, if E23 repo is up to date.....which I very much suspect it is.
Lots of enlightenment updates there.

I don't see any updates when running apug.... May be I already installes those updates without paying attention

How could be compare our version of E23, the easiest way to know if I am using the last version ?

Well mine now comes up with this error:

And the built--in screenshooter now comes up with an imagae editor but no way to save the shot.

Maybe wait a while ..... looks like there's some new bugs there.

@Thanatermesis are we looking at Elive or Enlightenment bugs ??
In the latter case how do I submit these bugs (in reference to version) at phab.enlightenment.org as some of them (got a few more) are new ??

Invalidated that one ..... it was a size issue. There were buttons underneath that weren't visible when the screen is magnified.

Where the latter submission has a link to the a screencast:

Gofile is a free and anonymous file-sharing platform. You can store and share data of all types (files, images, music, videos etc...). There is no limit, you download at the maximum speed of your connection and everything is free.

Can anybody stat this experience?

@Thanatermesis what command do I need to show more debug info ???

I can try to replace e23 battery icon with Cayro one. But I need to know:

I don't promise to provide the updated theme quickly, but I'll try to do the job.

It's here default themes for cairo & E23...
The fact is that the battery icon on current E23 theme is unreadable (time left, %, are white on clear blue / light effect... And it's needed to have the mouse on it to have this information, where it's (for me) interesting to have it permanently (as in Cairo's)...
For now, I think about perhaps using a mix of shrinked original E23 & Cairo docks...

Many thanks if you can do something on that!
Salutations!

The fact is that the battery icon on current E23 theme is unreadable (time left, %, are withe on clear blue / light effect... And it's needed to have the mouse on it to have this information,

Meaning you "only" want a different color scheme (font-background) and you want it permanently visible i.e not "only" on mouse-over?

The latter should be easy enough ---- the color scheme I don't know but I suspect it shouldn't be hard either.

This leaves us guessing whether it's with the default E23 theme and what cairo-dock icon has your specific preference.

Maybe you should take a little more trouble in being clear what you want/expect.

Me personally, I'm quite happy with mouse-over.

This bug turned out to be Elive specific and has been seen to. "apug" will solve the issue.
If you haven't encountered it .... all the better.

apug should do the trick, if E23 repo is up to date.....which I very much suspect it is.

yes, yesterday's build, apug includes the update of the "enlightenment" package @yoda, repo is "up to date" as the "u" in "apug" means updating the repo list before to perform the upgrade

How could be compare our version of E23, the easiest way to know if I am using the last version ?

you can check the version of the package installed, normall the elive packages has nice references about that, for example:

here we can see 3.8.2, which is an (always incremental value) to reference to the last/previously elive version release, of course is not related directly to it but is a good way to have an idea of its "up to date status", other packages includes a date timestamp too, like the elive installer, which is now:

The second value in the enlightenment package version is the TAG from which the developers marked the last one, also an orientative reference, and the "git" part means the exact commit from which the built has been made, very useful to know the exact version in order to see if includes a specific commit or not, or if we are missing wanted commits, etc...

The "buster" part finally is needed to keep a non-overwrite compatibility between packages that may exist from another debian / elive release in the repos, and the "12" is a kind of reference to the building controls modifications

And the built--in screenshooter now comes up with an imagae editor but no way to save the shot.

I think I have see some comments (emails) about that issue in my mail from you to the E guys... so let's wait their fix for now

thanks for reporting! we are (with patience) going to a stable and usable E23 thanks to these reports

this is a "build" (from source code) version, the 99 doesn't means anything special more than "the last version available before the next (24) version", if im not wrong

@Thanatermesis are we looking at Elive or Enlightenment bugs ??

well, elive has actually nothing to do with the e23+ bugs (we only have the package, but no modifications / integrations by elive has been made on it yet), so all the bugs (or almost all) should go for the E guys since its just a clean E (vanilla) version...

In the stable version we have "e17" (our modified e17) and "e17-plain" (as a vanilla / default E original code), which is useful to install one or other in the case we need to verify if the bug comes from elive or from the E sources

For your exact comment, the bug was not from E and not exactly from Elive, but it just required a chmod specific setting to the package files (sticky root privileges)

@Thanatermesis what command do I need to show more debug info ???

About what? Enlightenment running? well, this is a very delicated topic.. you should use eina_log for that, but this is extremely verbose (you have levels of verbosity too), or just show logs about a specific domain of the E process... another option is to use GDB specially if you want to catch a specific broken state

You have examples of how to use eina_log debugging in from the commandline in the middle of this page Eina: Log Tutorial , but you need then to run E23 from a terminal, which means:

That will run a new X11 session with a terminal (instead of a window manager), from it you can run "enlightenment_start" to start the startup process of E, so before it you can add those environment variables, also its suggested to run "tmux" before it, so you can access from this terminal even if is closed or remotely from another terminal / computer

But instead of the previous link, a much better and complete info can be found in:

It's here default themes for cairo & E23...
The fact is that the battery icon on current E23 theme is unreadable

let's not worry much about the themes at the moment... because they will be very (entirely) redesigned for the final theme to use in Elive (similarly to the one in the stable version of Elive, very probably), I suggest to just stick at the default provided theme/s which should be the most compatible too