How to add a second language in Elive

I have a problem adding a second language in Elive Beta 3.8.17 which is greek.
Can someone help me?

Hello Giorgosm
Welcome to the forum.

In regardto your question:
Do you mean change the whole system language to have both Greek and English available or is it just an application like the spellchecker office and/or the keyboard lay-out?

Only the keyboard lay-out

Left click somewhere on the desktop, got to "settings", scroll down to "language and keyboard configuration" and configure from there.

I tried from there but it just replaces the default language from us english to greek. I want to have more than one.

I had a look and you're right ..... that configurator only allows for a single keyboard.
For what it's worth, I use enlightenment (E24) and not E16 and that does allow for multiple keyboard layouts but from what I can see E16 doesn't.

Personally I always changed my keyboard settings through the command line on E16......i.e the configurator doesn't offer the exact settings I want.
For a qwerty international layout that allows all sorts of variations using AltGR I use the command:cat /usr/share/X11/xkb/rules/base.lst | grep fr)
setxkbmap -rules evdev -model evdev -layout us -variant altgr-intl

And if you want to find the layouts available for greek:

So maybe you just stumbled on a missing item here.
I suppose we could create a GUI script to run those commands or switch layouts using a certain key-combination to accommodate your issue specifically or make a general keyboard configurator.

Very probably there's already something like that out there on the net.

So i tried doing that but i have this problem now: 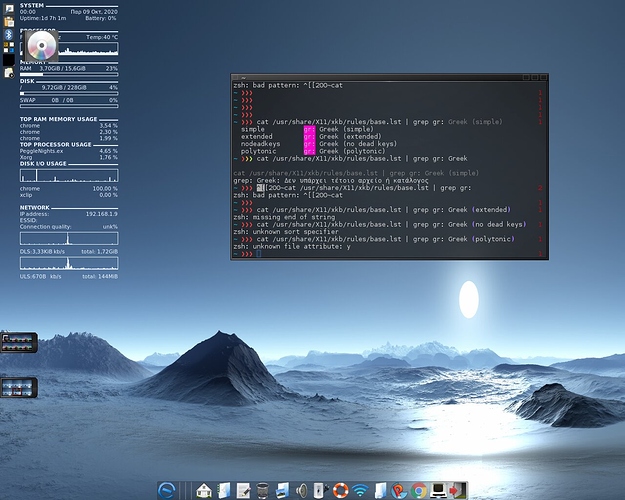 I wrote the command: cat /usr/share/X11/xkb/rules/base.lst | grep gr:
but when i pressed enter it gave me some other choices. and when i tried to write the choices i had these errors (see the picture)

As a first: be carefull when copy/pasting commands from a browser.
As you can see, all kinds of cruft gets pasted too.

On a second ..... I don't know where the (simple) came from, certainly not from my post.
Brackets in a command after a space are seen as another nested command, hence the errors.

If you want to give "grep" a double filter you'll have to keep both expressions in " " like so:
grep "gr: simple" or simply use it twice, like so: grep gr: | grep simple"

Anyway a simple keyboard setting would be:
setxkb -rules evdev -model evdev -layout gr
Unless you're looking to add one of the available variants shown in your first output, ranging from simple to polytonic.

On a side note:

) or a key combo to execute the wanted command by adding it manually.

Otherwise we risk this becoming a "Shell Basics Howto" thread, which by itself isn't a bad thing but should be started as a thread of it's own if needed.

So i wrote the commands: 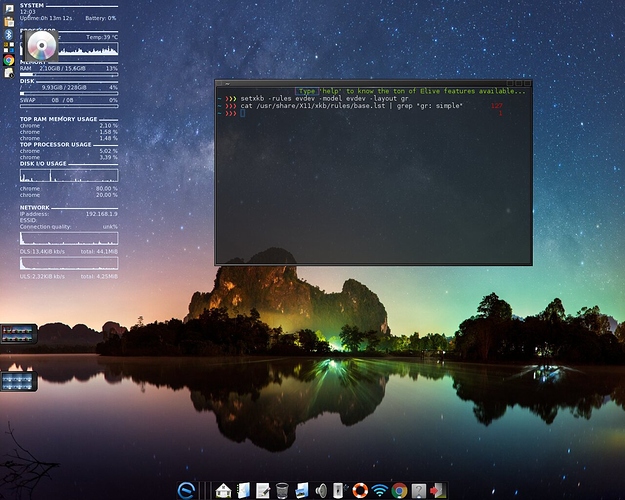 Then what should i do? I did some combination of keys if it was possibly added but nothing happened.

) or a key combo to execute the wanted command by adding it manually.

Might try it out when I finish school today. (It's friday : D)