this section of the forum is not very used but is an important one, so let's brainstorm something here:

The new isos includes 2 different kernels, why? because they has 2 different purposes, and what we need is to tell the user this. For example:

For me, I have seen some bug in the intel card with the new 5.4 (bpo 3) kernel, it seems like to block the computer, this is very bad since its a common graphic card, so the thing is that the new kernel (backported) can include more hardware drivers (only the most recent ones, old computers should have the same drivers availability) but its also (can be) less stable than the old kernel (which is the one provided by default in debian stable, which included many many patches over the time)

So the right choice in fact is to select the old kernel, which is more stable, unless the user has some hardware that doesn't works with it and needs to use the newer one (like a wifi card, etc)

The reason of why the new one is included first in the boot options is because a newer kernel can guarantee more hardware working by default, while the old one can lack a few support on old computers (first impression by the user is to expect everything working, second impression is to expect working stable)

Note that there's many things involved in the different selection of drivers, for example maybe everything works good using the old kernel for you but it doesn't suspend correct because needs new driver features included in the new kernel

Note: I recently added a message in the installer which already suggests to use the old kernel if the user is using the new one

Now that I have explained the differences between kernels... my concern about what is all this thread for, is about the message to include in the boot menu: 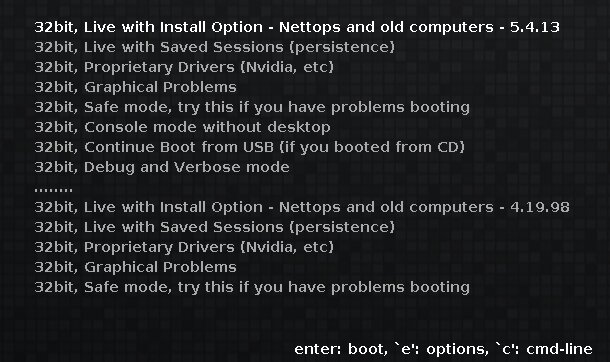 So I want to remove the "nettops and old computers" part, since this communicated-message is already included in the downloads pages of the isos (user must pick 32-bit download for those old nettops & old computers), and in fact there's not an option for "new computers" in the 32bit download, so i found this part a bit useless for the iso type as a whole

Instead, I want to use this free space to tell something useful about the kernel version, like explained before, the newer kernel will include wider drivers support for newer hardware and the old kernel includes a more stable overall experience. So main concept is:

I'd use "latest hardware" in place of "newer computers" as a catch-all for computers, laptops, vga-cards, etc.

"more stable" is a bit strange wording, as it's either stable or it isn't. There's no superlative there.
So use "stabler" if it's a comparison.

Sounds good, but I also try to search the simplest words possible in english when there's no possible translations (like on the boot messages), for example "computer" is more easy to understood for much more non-english speaking people than hardware

yes "more stable" sounds a bit strange, the "more" is meant to reference "more than the other one", mmmh... "strong stable" maybe? "very stable" ? mmh..

they also sound as very different options to pick, which is a good point in the moment of the selection

I know that the meaning of "option" is to tell the user that is not forced to install, but at the same time I feel like it decreases the importance of the installed system, in fact, Elive needed to put messages in the past "telling the users" that Elive is more a distro to install than just a livecd, because of its name and even domain, people tend to think that is a little toy (livecd) to play with, while is more a distro to install and use daily than a livecd, the livecd is only an extra feature

Or
"well tested" or "reliable"

"live with installer" is clear IMO too.

I believe when I was emailing you about a server failure you suggested that we use http://elivelinux.org instead...? Though we'd have to keep the old domain name so elivecd.org redirects, and forum.elivecd.org might redirect to old-forum.elivecd.org???? Thoughts???

I believe when I was emailing you about a server failure you suggested that we use http://elivelinux.org instead...? Though we'd have to keep the old domain name so elivecd.org redirects, and forum.elivecd.org might redirect to old-forum.elivecd.org???? Thoughts???

not sure to understand

in any case these things are different topics, the domain (elivecd) is not well descriptive for what is elive (cd? not anymore, should be more like eliveusb.org lol), elivelinux is a better domain for it at the moment, but to move to that domain is a lot of work, and also we lose the "domain age" by doing this

about this actual topic I think that the actual beta versions (like 3.8.12), includes a well defined sentence for the new and old kernels