As you may have noticed,I use screenshots quite a lot in articles, HowTos or explaining stuff here on the forum.
Whilst using Enlightenment (E25) it's screenshot tool really pleased me in the way it lets you make quick annotations like text, arrows or general changes, on the fly.
On E16 that tool was missing .... we use 'scrot' through the 'elive-screenshot' tool (also through the PrtSc hotkey) or manually with the Xfce4 tool for that from the 'utility' menu. Also a fairly simple one albeit a tad more than 'scrot' with a nice option to copy to 'imgur' for hosting in the cloud.

Scouring the internet I came across a nice little program called 'flameshot' that works quite well annotating on the fly as well as offering 'imgur' storage.

here's some shots (of taking a flameshot

) and the options it has.

I think we should check this out and, if agreed use it from the 'elive-screenshot' in place of 'scrot' by default.
It would take away the requirement of the shift+PrtSc hot key as the needed options get offered on startup .... and IMO hosting on 'imgur' is a good way to not have our hosting too heavily used by uploaded shots.

Pennies for all your thoughts.

Imgur strictly forbids hotlinking IIRC. You can put an image there to be viewed, but you can't use it as an image hosting service for another website (or similar).

Imgur is a bit dual there. On the one hand, from their 'term of use':

Also, don't use Imgur to host image libraries you link to from elsewhere, content for your website, advertising, avatars, or anything else that turns us into your content delivery network.

But OTOH they promote sharing on other platforms:

You can upload images anonymously and share them online with only the people you choose to share them with. If you make them publicly available, they may be featured in the gallery. If you share an image publicly with Facebook, Twitter, Digg, Reddit, etc., then it may end up in the gallery.

So I tend to go with the latter, considering the forums here are a public platform as well...albeit, admittedly there's hardly any profit in it for imgur.

So maybe it'd be safer (when i.e using pics in long term available content like wikis and HowTos) to use the elivelinux server.

I was looking recently for a screenshot alternative that includes "editing images" similar to how useful is in WhatsApp, I tried "api deepin-screenshot" which looked nice but the copy-to-clipboard doesn't work so only for that becomes useless lol

Already implemented all for the next build

if you upgrade check first the new hotkey assignations in the hotkeys pdf, the new user confs includes them, and the package will be included in the next build just like with everything else said

Hmmm, I still used (scrot) 'elive-screenshot' with shift-PrSc key combo as fallback because 'flameshot' sometimes seems to hang on too many configuration changes in a row.

It doesn't show up in the menus but creates an instance in the systray after first run.

We'd need to make a .desktop entry for it but IMO isn't needed.

well, I was asking "on which section is better to show up?"

in the "Graphics" menu or in the "Utilities / Accessories" menu? (so its a question about on which category this fits better) - maybe for not saturate the Utilities menu with too many things it should be included in Graphics which is more specific to that purpose?

maybe for not saturate the Utilities menu

Argreed.
'Utilities' is too filled up already....we need to bring that down. Maybe have sub-menus?
'graphics' is the obvious choice.

Albeit my 'graphics' is getting reasonably filled up too. 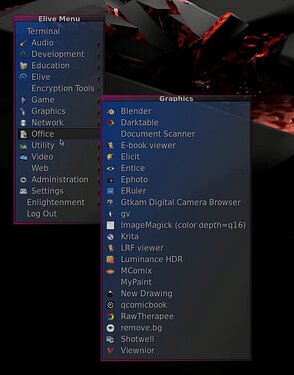 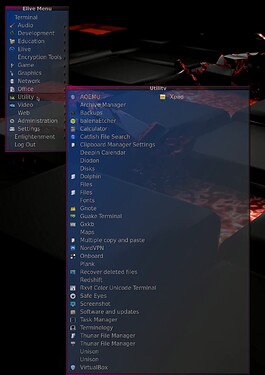 In the mean time, I found a good reason to do have 'screenshot' in the systray.

I quite often want to run i.e a fresh version of Elive (or another OS) in Virtualbox for testing or showcasing stuff.
If I hit the specific 'hotkey' it won't open the screenshot tool, unless I leave with the pointer using the 'right-Ctrl' key (or sometimes the specific desktop) and finding the screenshot tool in the menu or using CML in the terminal.

Having 'flameshot' in the systray greatly simplifies this. It's just a 'click' on the icon away. 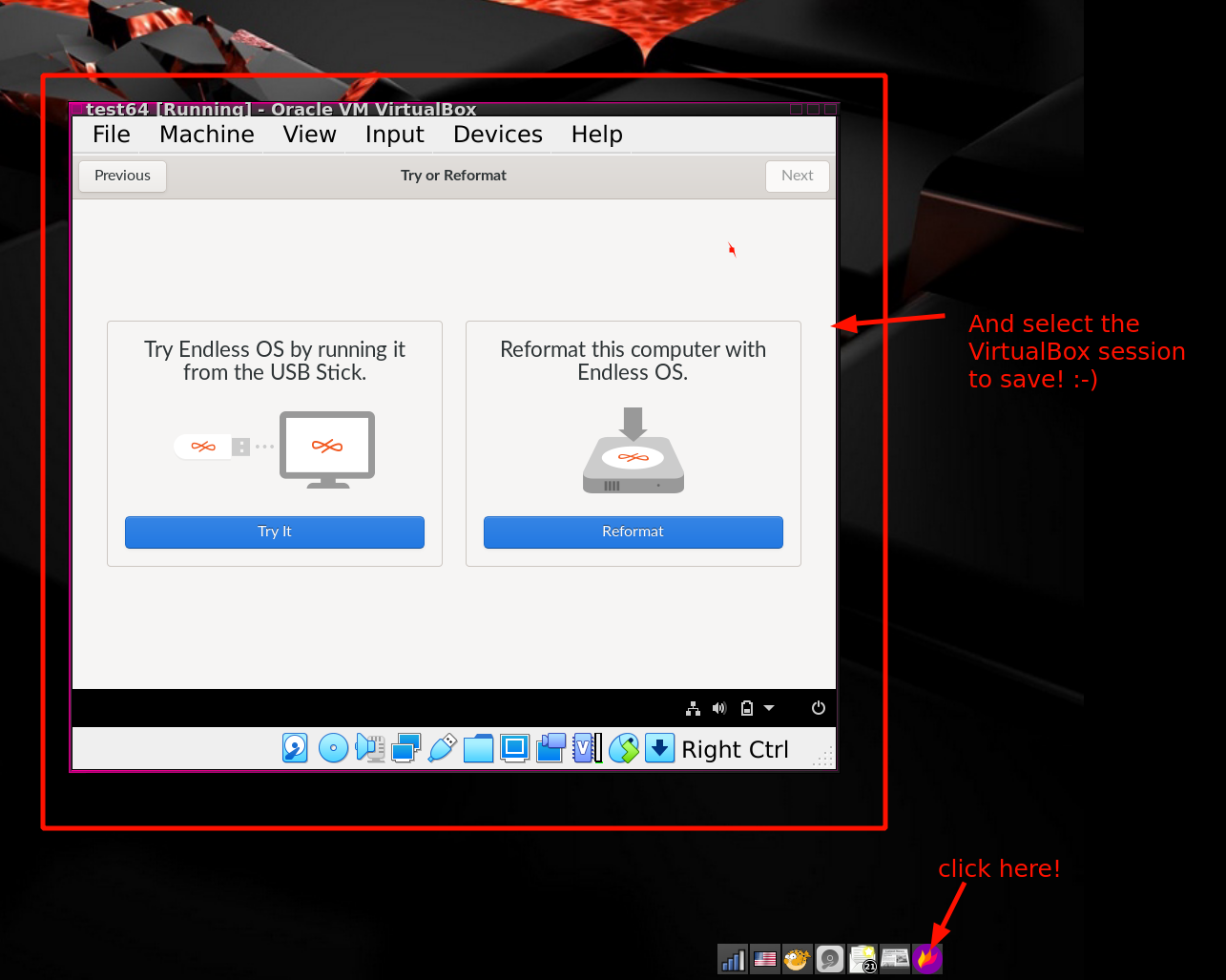 well thats a problem of vbox and not related to flameshot

i mean it happens with any other app, for me is always difficult to simply open a terminal (or use my music hotkeys to change song, etc)

the thing is that in the new implementation, "ctrl + Prtn" runs the screenshot tool with the needed options without needing to add it to the systray (this is also bad not only because cluttering the desktop but it also leaves a process running using ram, using the hotkey instead is run only when you need to use it)

on the other hand, nothing stops somebody to hit "alt + esc" to run flameshot himself and having it on the systray

on the other hand, nothing stops somebody to hit "alt + esc" to run flameshot himself and having it on the systray

I'm cool with that and .... I'm prolly one of the few that wants a screenshot from outside of Vbox.
My 'issue' is that it always requires a mouse action (right-Ctrl click, click Pager) to have keystrokes available outside Vbox ...... a matter of habit, I'm not very "mousey".

I really like 'flameshot', it's great for quick, annotated shots.

Looks good.
A replace seems to be OK