So I wanted to install drivers for Canon MX452. After a while of searching i found this MX450 series IJ Printer Driver Ver. 3.90 for Linux (debian Packagearchive)

It worked for a while, then, after reboot, now the printer shows up but does not print. It works on two macs, and i havent tried it anywhere else. I am running 3.8.2 32-bit.

Does anyone know Why this is happening?

Looks more like a "cups" issue there.
Try installing/enabling the printer from the web interface as the cups-applet sometimes has issues.
http://127.0.0.1:631

Still hasn't worked. Tried installing the printer from the web interface - it's recognised, there's no error on the computer or printer, but nothing prints.

Same issue with a Compaq printer.

Is this over the network or over USB?

Is this over the network or over USB?

Network. The Compaq one however was over USB.

So through printer settings you set to look for a network printer on the right IP address after which cups should come with the printer, hardware address and the driver.

I do sometimes have to remove the old settings to get a working network printer after a reinstall or different router but generally it works OOTB.

Cups saw the printer on the internet on the setup page; I selecte dit.

There were no specific drivers for it; I'm thinking that's the reason.

A quick search found this:

How to Install Canon MX452 Driver for Linux

There are .deb files there at the bottom of the page as well as the source.

Did not see that on my search. Will try in due time. 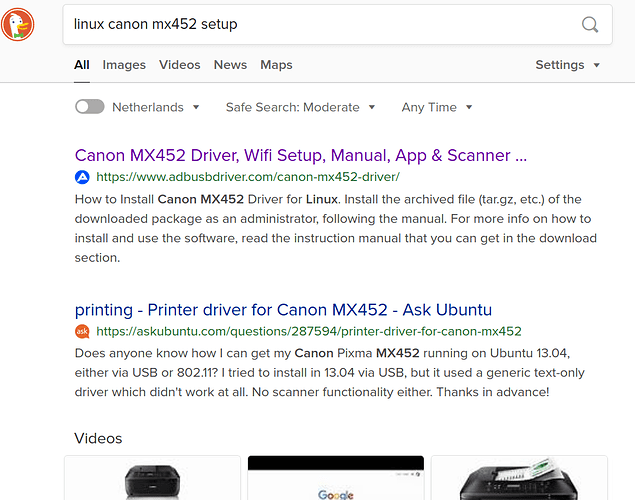 ah, i don't use duckduckgo. I also should remember that wording - normally i say somethign like canon mx452 printer drivers.

I did search it tho.

Generally, if you don't add "linux" as a first in your search .... you'll get knocked over by Win drivers junk, paid solutions and loads and loads of malware.

Let's be real: Printer drivers not working is THE way to find suckers.

you'll get knocked over by Win drivers junk

The order of the search term is important too.
The first is dominant.