) my wife's aging Thinkpad X200T work laptop from Ubuntu to Elive.
This wasn't because I so badly wanted to but because Ubuntu was having serious speed issues compared to my Elive machines. So I happily complied to the request.

Transgrading itself was a pain-free experience with all the right questions asked and all the needed warnings.
Once installed I went about to change the looks a bit to be a bit more compliant to the Unity desktop she'd been using for the last few years so as not to have too much of a shock. 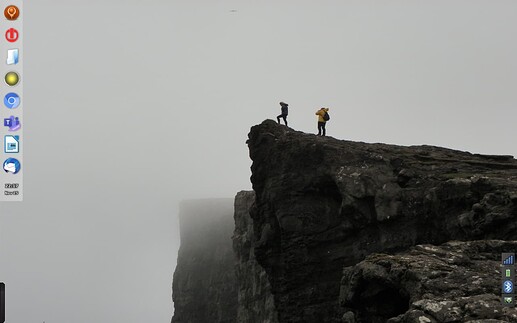 Like I said, the transgrade itself was pain-free but there were some minor issues:

All in all, not bad but does still feel a bit unreliable (just a feeling, no proof) compared to a straight Elive install.
A nice new lease of life for that excellent piece of hardware, even the wacom pen and screen worked OOTB.

Addendum
I moved the pager from bottom left, where it got blocked by "plank" sometimes, to the top right ..... where I think the Elive pager should be in all cases ..... as a trademark.

what about renaming the dirs "firefox" to "firefox-esr" from the users home?

can you try this? (or better: copy them) probably on ~/.mozilla/firefox*

Rofi as an application starter will not run because it cannot find "libxcb-util.so.1" which isn't an issue on any of my other Elive instalments, so I suspect there's an unclear Ubuntu heritage there.

that's strange, should not be the case, make sure that the rofi is wanted to run is from /usr/bin and not from /usr/local or /opt (use command "which" or others like "strace -o log.txt rofi"), and: find /usr -iname '*'libxcb-util'*'

about icedove, this one needs to be renamed / moved?

All in all, not bad but does still feel a bit unreliable (just a feeling, no proof) compared to a straight Elive install.

if only these issues, that's not much, easy to fix most of them (or create new firefox conf, no big deal), but list them if you find later more issues

but list them if you find later more issues

That was Nov '21, so after that no more issues.

It was also Buster based Elive (3.8.24) which didn't use 'libccb-util.so.1' yet but Bullseye does, so that solves itself on the next release.

about icedove, this one needs to be renamed / moved?

No, not that I recall.

what about renaming the dirs "firefox" to "firefox-esr" from the users home?

can you try this? (or better: copy them) probably on ~/.mozilla/firefox*

True, easiest is to import the bookmarks, passwords, etc. either into another browser like 'chromium' (it'll offer the multiple versions of firefox it finds).....I don't recall if 'firefox' can import from it's own version but it can certainly import back from 'chromium' again.

Another option, if you don't mind the privacy intrusion is to have a profile backup via mozilla.org or .......
if you do mind those intrusions: make your own local back-ups.

That was Nov '21, so after that no more issues.

It was also Buster based Elive (3.8.24) which didn't use 'libccb-util.so.1' yet but Bullseye does, so that solves itself on the next release.

yes but then this means that the "rofi" is not the one shipped on the OS but an own installed one?

in any case I assume the best is to keep it as-is, the home conf directory should be the same one if compatibility of versions

I changed (only slightly) the heading ... to make it easier to search for, after a short interaction on another thread.

"rofi" is not the one shipped on the OS

This was Ubuntu 18.04 which used a newer version than the one Debian had.

triantares said Ubuntu uses firefox; Elive uses firefox-esr. ESR is inherently older than the main branch unless Ubuntu's repos are outdated (which would be bad security practice for a web browser).

I upgraded the above installation because there was a strange issue with the soundcard.

All of a sudden, plugging in the earphones didn't give any sound in those earphones ..... albeit everything in the system said it was connected and playing. Ditto with other headphones.

So I was expecting a hardware issue there but after testing the 3.8.27++ live version the plug did work.
Extremely strange as the Elive (3.8.24) had been continually upgraded.

Anyway, upgrading to Bullseye based Elive using 3.8.27++ actually went quite well. No real problems at all except:
Firefox-esr again refused to load old profiles.
That clearly isn't an Elive issue but comes down to Mozilla creating a mess.

Importing the old profile settings into Chromium and then back again into the new Firefox profile does work nicely though.

This resolved the headphone issue, which now works as it should and on top the bluetooth does a better job ...... somehow Ubuntu has different settings that were inherited on the first round.

I have seen that sometimes pulseaudio stops to working without reason

I have did a lot of improvements on the next version (public bullseye) that is going to be released very soon, after a few betatestings in multiple machines and also 2 upgrade modes, so many improvements on that too, like pulseaudio fixes too (pulseaudio checked on every desktop start and if not works, restarted its settings)

I have seen that sometimes pulseaudio stops to working without reason

It wasn't that. The built-in speakers worked fine as did the bluetooth speakers and earphones, it was just the earphone jack that didn't supply sound anymore.
The jack is recognized and turns off the audio on the speakers and then all the software shows audio playing except ------ it's not!

Pull the jack and the speakers fire up again, hence why I thought it was a hardware issue.

or what is the fix the installer must do?

For Firefox there's nothing we can do, it's some kind of stupid decision at Mozilla to have a new profile on any newly installed higher version.
The same now goes for Thunderbird too.

Meaning that (on installing a newer version) you need to enter all credentials for your mail server again, where 'imap' servers are easily put back but 'pop3' and local folders is a mess.

There is no way to get either FF or Thunderbird to load an old profile albeit they're thankfully not deleted.

So there's the option 1.:
To have a backup somewhere of bookmarks, passwords, etc and import those or:
2.: Let Chromium import the old profile (it shows all the available profiles) and then get FF to import those settings back from Chromium.

In both cases you'll need a running Firefox (and/or Thunderbird) to do the importing, so there's no way the installer can that for you.

(which one is the directory in ubuntu in fact?) 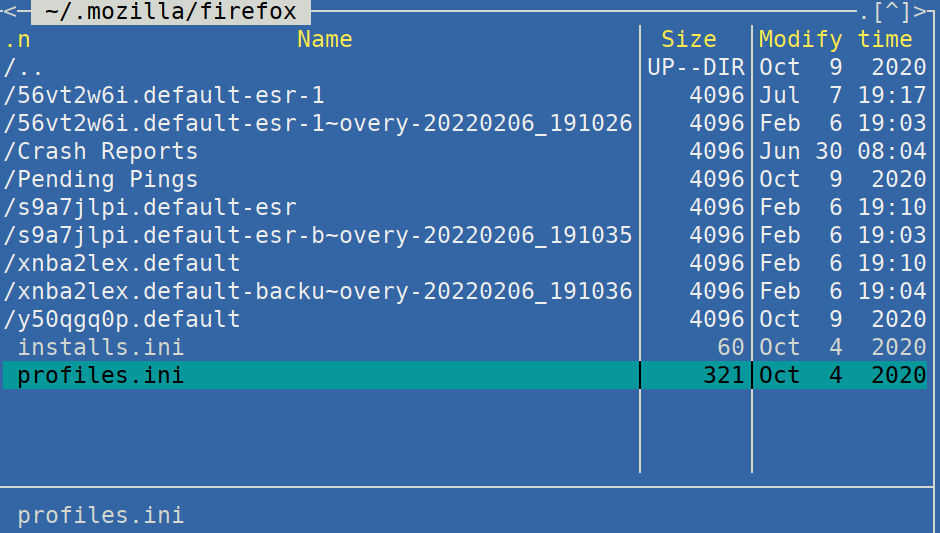 You can see there's (not so fresh) backups there that can be imported.

I tried manipulating '~/.mozilla/firefox/profiles.ini' as well as 'install.ini' to point to an existing profile but to no avail.

They will NOT load.

According to the mozilla website this should work (but I didn't get it to):

This would require having the newly created profile already available i.e letting FF start up. That would mean that the installer has already quit i.e you've already booted into the new (or upgraded) installed system.