I used to be able to run this drop down console program called yeahconsole on Elive; it is similar to guake in some respects but did not have KDE or GNOME dependencies. Starting it up gets a segfault which I have pasted below. Maybe one of you out there can figure this out; I was thinking of contacting the yeahconsole devs and providing them with info, dump, etc
[ 3887.617346] yeahconsole[17520]: segfault at 1 ip b75fd9e9 sp bff407c0 error 4 in libX11.so.6.3.0 [b75c6000+134000]

For what its worth, I've been using guake without a hitch on elive.
Frankly I've never even heard of yeahconsole (found it in the meanwhile)
I've tried to replicate your experience and installed it but on my laptop yeahconsole works fine.

Could it be that you have a nvidia card? ..... grasping at straws here.

I wont recommend using another terminal than terminology, or urxvt as an alternative, since they are configured in Elive pretty well and tested and compatible

If you need a dropdown feature, check the "quickaccess" enlightenment module, its a similar feature that can dropdown any window type

Installed guake (thanks for the tip); so far the only difference is in the screen width, but that is only minor. I would consider this resolved, thank you all for your input!

the only difference is in the screen width,

When opened with F12, right-click in the middle somewhere and chose "preferences", it'll allow you to set all kind of behavior and appearance.
I also have added it to start-up applications..

Note: to have the same colorscheme as the Elive default terminals you must probably edit the .Xdefaults file to add the color definitions for those other* terminals, if you think that some conf entries are missing for other terminals share the code that needs to be added and I will include it by default

Guake does exactly that, by default 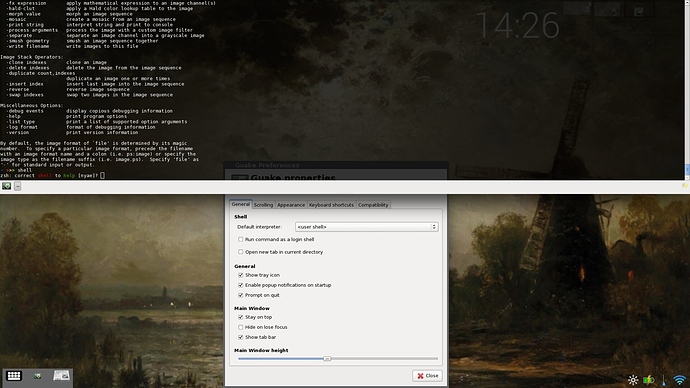 What about this other way?:

Just a little alternative, but I think that the QuickAccess module does the job better for that

I searched online to see if I could change the width. Found one that told me to look for width=100 in the python code /usr/bin/guake. It can be set to less than 100 percent for those with a really big screen. Make a backup before editing the code, in case you mess up; if it's in /usr/bin, you might have to use gksudo gedit to make the changes--that was straight from that forum anyway. 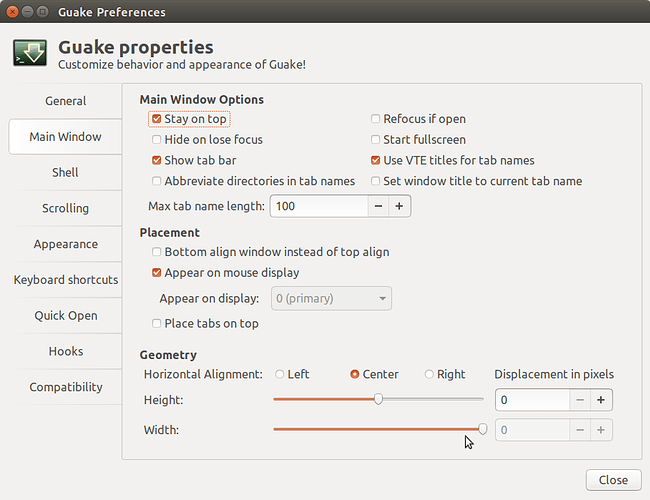 This is related to an earlier post about synaptic's Reload. I pulled guake using synaptic and it installed the older version that only had the slider for height (not width). I believe it's version 4.3-3. No worries; will get the latest and greatest myself; thanks for your help!

Be careful with "latest and greatest" as you might get (python) dependency problems. I've got 3.05 running there. Better to stick with's in the repositories.
Unless you're feeling adventurous (fix it till it breaks) of course.