I have installed E24. It is quite stable and I like it. I would like to know if this problem is known.
All the balloon texts that appears when you hover with the mouse over an object are garbled. 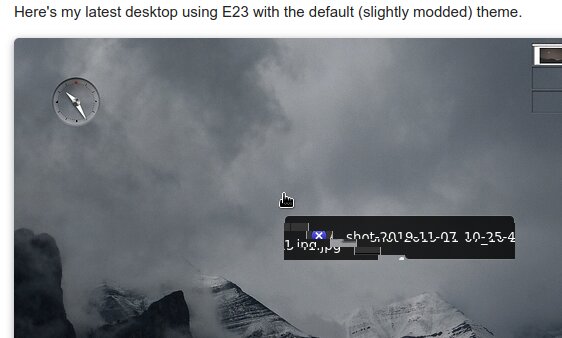 I do not have that on Enlightenment, they're crisp and clear as you can see here.

Is this only in the browser when hovering links or in other apps like thunar here, as well?

Tip when modding your desktop:

When modding the "pager" position and "clock", Don't move them to the desktop (or overlay) directly with the right-click menu but create a separate "shelf" for them.
I recommend separate shelves, they are stabler and easier to manipulate in position, appearance and size.

It happens everywhere even out of firefox-esr. Could it be related with cairo-dock ? I have cairo-dock still running in the bottom of he screen. And I have omni that bring an invisible window on the screen when called. So I can type something but its not visible and omni will do it's job as usual unless I have an invisible error message that I can't see. Those 2 might no be related. I have a HP laptop with a rather standard radeon graphic card and all the rest seem to work Ok. And from time to time I have E24 to freeze for a while.

I will try to run without cairo-dock to see if it changes anything.

I have modify my E parameters to not start cairo-dock.
The problem did look like it's not there anymore. But I still have it in firefox, thunar, and on applications that show balloon text. 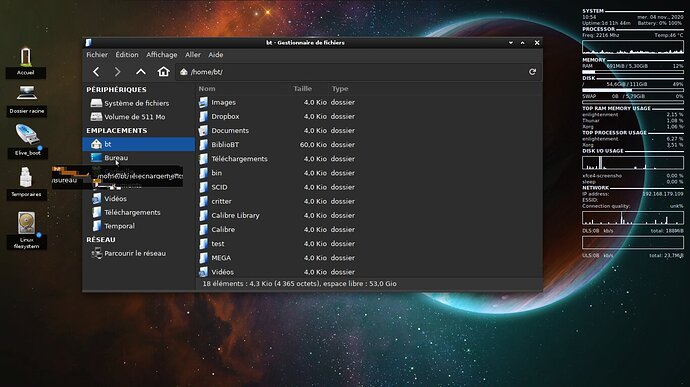 I have modify my E parameters to not start cairo-dock.

on enlightenment it's better to not use cairo-dock but the i-bar application. It's very versatile and consumes less system resources than cairo-dock.

As to the occasional freezing: I noticed the same when opening a file with many pictures, using EFL (the enlightenment default file manager). Generating all the icon previews takes a fairly long time and freezes the machine.
After a while (once the icons have been generated) this goes away, unless when connecting i.e a large USB disk.

Thunar does a better job albeit that it sometimes kills itself severely, every now and then on USB disk removal.

Considering your (very nice) Enlightenment screenshot says it's OpenSuse based, be aware that Elive (and thus me) uses the latest Enlightenment "development" version whereas other distros use an older "stable" version.....that could make a real difference, especially when it comes down to the compositor.

I have omni that bring an invisible window on the screen

I have no idea what that is .... could you explain?

Sorry for the mistake in the name of the screenshot. It is really from Elive with E24.

I'm taking a look on OpenSUSE Enlightenment too. The laptop I use every day have OpenSUSE Tumbleweed KDE and I have added Elive E24 not E17.

I have installed Elive on a fast USB key (Samsung 256MB) and I find it is more resource efficient that the OpenSUSE version. Elive at startup use about 325Mb on my laptop while OpenSUSE use over 850Mb. Since E24 is installed and KDE, there are some KDE stuff that still run and clobber memory. I could optimise by installing a more minimal OpenSUSE server image and add the E24 desktop. But it's my every day computer and I don't want to mess it up ... I will take a look at iBar and I'll open another thread for omni.

sounds like a driver problem (rendering issues), does the recent versions of Elive beta still have the bug ?