Howto add (snap) apps to cairo-dock and the launch-menu in 3.7.4

If, like me you have installed apps using "snapd" you will find that they cannot be added to cairo-dock whilst running .... nor can they be added from the launch-menu because they are not there either.

and add the following text:

After which (when saved) cairo-dock will prompt you if you want to open the application. 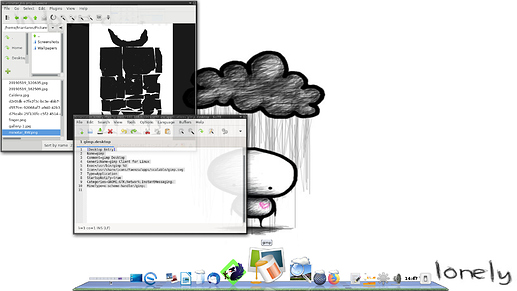 The solution is to make a .desktop entry in /usr/share/applications.

in fact, the provider of the app should provide a .desktop file with the app... how otherwise is the app meant to be run since .desktop files are the standard launchers? spank to them...

Every time I used snapd on ubuntu distros, I always ending up have the installed application icon showing up... It's may be an bad integration of snapd for E Desktop Environnement

The adding and editing thingy is a nice simple stanza to add other personal stuff to the dock ....... like a lockscreen or a screen-rotater icon for on my tablet.

The adding and editing thingy is a nice simple stanza to add other personal stuff to the dock ....... like a lockscreen or a screen-rotater icon for on my tablet.

Lock screen to the Dock or somewhere is a must + a already made shortcut for the command to lock... for newbies or less patient people

Yep, but bringing up onboard just to lock the screen is a drag. It's a tablet ..... not always keyboard attached. 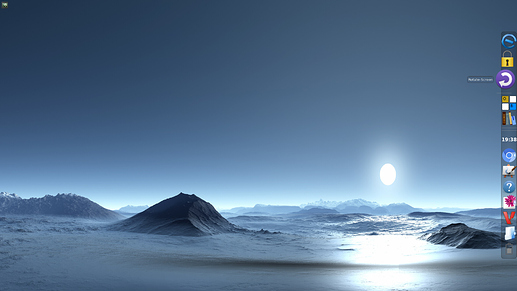 The one above rotate-screen is my lock.

I vote for the default background to be this one

I also have the same

Looks a bit weird when I rotate it though. 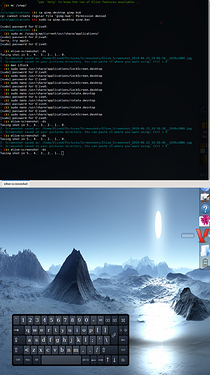 this is absolutely non-standard, but even worse: unable to implement

That was on the reinstated machine that caused so many problems last time.

The "only" difference to last time us that I had activated the BIOS partition when upgrading 3.7.4 on the same machine , so no questions asked.
All looks "in the pocket" to me now.

Ultimately, the ony real problem that now can occur is the danged partitioning, in that it always carries a risk.
So backup, backup and backup if there's something important there.

For now, for me it's a workable solution until gimp and mypaint get their naming schemes sorted out.

Then: Out the window goes snap!

Out the window goes snap!

not out of the window

this is extremelly crappy:

Probably because every developer only has eyes for their own app and doesn't give a hoot of what snap should be doing.
Suppose next they'll be wanting to containerize everything, every app its own virtual space.

On the Ubuntus I tried, that was a 50% chance of success.

the .desktop files are scanned from this standard directory list:

so that "snap address dir" makes no sense the way is installed, it doesn't follow any standard, so it is not well made

how other distros does it? i dont know... but probably using an ugly hack

On the Ubuntus I tried, that was a 50% chance of success.

thats their fault (snaps things), they should be better made, following standards and strictly allowing only things in the correct way instead of "ugly hacks" (putthing things in any place, in any way, any permissions, etc)

I vote for the default background to be this one

I also have the same

The library "problem" has been resolved so no need for jumping throuht these hoops anymore. Both "gimp" and "mypaint" install fine alongside each other, using api (apt-get install).

Just tried to switch my firefox to the latest from mozilla and installed it in /opt . made a symlink to the usr/bin/firefox. Changed the edited firefox-esr.desktop icon file in /usr/share/applications with this addition "exec = /opt/firefox73/firefox %U". to point to the new firefox installation. When I click the .desktop icon directly, it launches the correct new installation of the Firefox, same as when i type firefox in terminal.
My problem is that the launcher menu Firefox icon still launches the old default/stock firefox (which is an old version 5 series too old) from the repositories how do i update that to fireup the new firefox

remove/delete the firefox icon. Then run firefox and right click on the icon and add to dock IIRC/