Playing around with panels and E16

I started mucking about with panels/docks again.
This I tried "plank" that sort of has been resurrected bij ElementaryOs lately.

Plank takes some getting used to and has some strange quirks when trying to alter themes but it's doable.
I've put some screenshots together in a gallery, including 2 shots tghat uses "tint2" as a panel for comparisons sake.
Of course the wallpaper defines how a panel should look, so I tried a few using different plank themes.

Plank themes are inevitably still very OsX like docks so I intend to look for more options.
Interested to hear what you guys think.

very clean looking - suits me for sure.

Personally, I prefer to have the dock on the bottom and keep another one at top that shows what is going on (programs opened, time, network, cloud client, ...).

bottom and keep another one at top

It's something I've been thinking about and "panel' could do both i.e a slim dock on top (or bottom I prefer my virtual desktops top right). As I've only got laptops with 13" screens as the max size, I tend to be miserly with screen space.

For the (full screen length) bar I'm also thinking of giving "polybar" a good work out.
It has potential for that more than a panel/dock, in IMO.

That said, " plank" is extremely versatile and actually very easy to customize to a user's special needs, once you get the hang of how it works.

For me plank has one big caveat: No battery polling docklet (yet) on the current version available to us on Debian but does seem to be available in the github version.
So it's either wait it out or make my own as an application and add that to the dock as an item/app launcher.

Some mods I tried out with an extra panel/bar.

This time trying out what iot would be like using tint2 as a taskbar (with "rofi" launcher) and here's what it looks like with Plank on top and the bar below: 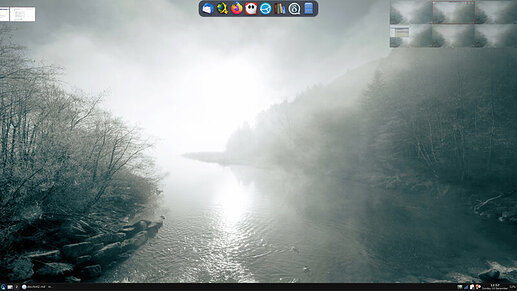 and subsequently moving both bars around: 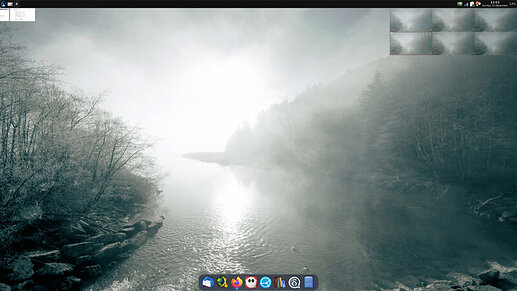 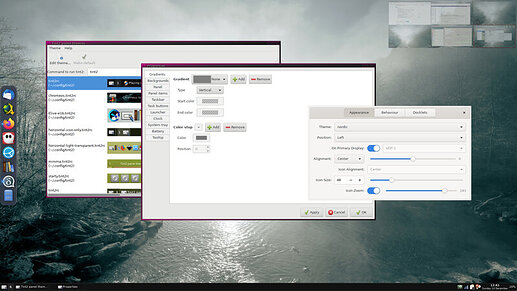 Naturally a lot stuff gets look better with Plank set to "intelihide" as its Tint2 that keeps track of time, battery and running apps.
That would be very hard to show without filming a desktop session and putting it up here, though.

Somehow it's all rather bland for my taste and all come too close to already existing desktops configurations by other distros (not counting the i3 DE of course).

To top off here's a shot of the IMO best configuration with a background that isn't too influential and shows the bar, dock and pager.
Agreeing with @IamElive here. 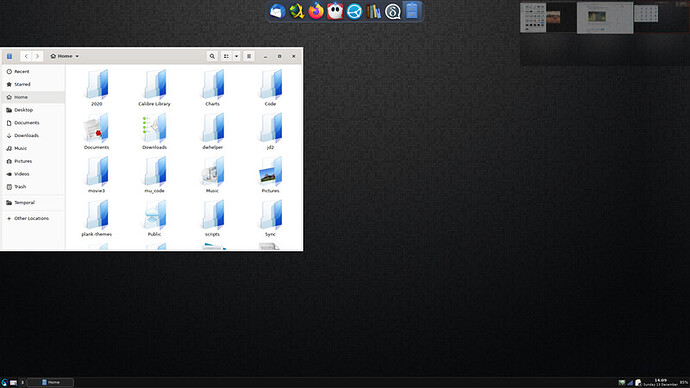 Eventually I think I'd settle for only the simple Tint2 bar down below, complemented with the pager top right.
The Elive icon bottom left does NOT open a menu (why do things twice when it's already there with left-click) but opens "rofi" which is like "kupfer", only lighter, more versatile and easily modded.

Rofi, nicely themed for dark in action on the same minimalistic screen as above.
Using @Thanatermesis Retrowave theme and a fitting rofi theme. 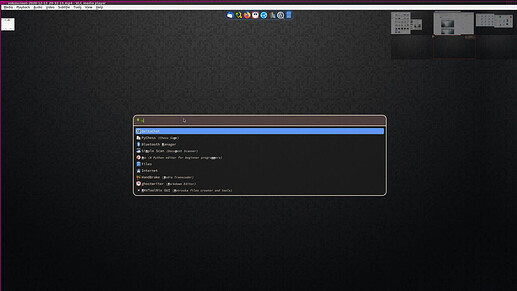 You start typing (part) of the command you're looking for and "rofi" narrows down the search including the tool-tip content..
That IMO is a lot easier than going through all the menus and sub-menus in search of an app you're not even certain of, what it's called.

Still very much in doubt about the plank "favourites" dock up top i.e at all.

And all of it with just a bit more than 600Mb RAM usage ..... Great stuff.
Let's kick cairo-dock and make E16 modern, fast and lightweight . 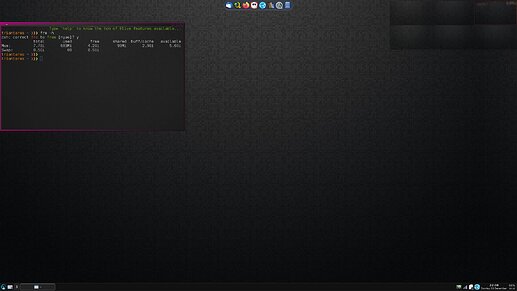 This desktop is going to WOW! so many folks when I show them, especially the speed.