Problem installing on a Macbook

I’m having problems installing elive on my Macbook. The thing is that I downloaded the .img for usb and I’m using the dd command to put it on the stick but once it gets stuck when trying to boot it does not recognize it. I’ve tried it on the two usb ports but nothing.

Your USB should work correctly if you recorded it this way, you can try it in other computers to see that it boots correctly. I assume that your problem is that a Macbook is a delicated type of computer on which is not easy to having linux correctly work on it due to closed specifications of their hardware specs, but also the biggest problem could be that Elive 3.0 uses very old drivers and this can be the main reason you cannot make it working on this computer

In any case, since you have the USB correctly recorded, I recommend you to search a howto in google about how to boot linux live in macbook , maybe you need some special configurations or booting system for it

Which MacBook in detail, pls ??

(some older models will NOT boot from USB, so tell me...)

BTW this info has been updated with an extra information for Mac's: How to show the Boot Menu of your bios - Elive Linux

Actually all Mac models with Intel Core Duo processor will not boot from USB;
you can install Linux with a CD/DVD only.
After install you have to hold down the so called 'option key' immedialty after switch
on the Mac until the boot selection screen appears - or better -
install the "refind" bootmanager.
Keep in mind: These Macs are 32bit Computers, not 64bit as mentioned sometimes by Apple. In OS X they can run 64bit applications through the special
Darwin attitudes; don't get faked - you can install a 32bit system only.

I wrote a very extended 'how to' with self explaining images -
unfortunately in German - it is a pdf file of 5MB.
If anybody interested, I will forward it via eMail or dropbox link.
It was tailored for a Linux Mint Cinnamon install, but of course,
it can also be a guide for another distro.
Am using a lot of several older Macs from 2006 with Linux;
they are all running very well without issues - and quick (!)
Don't throw an "vintage" Mac if you have one, you would regret... 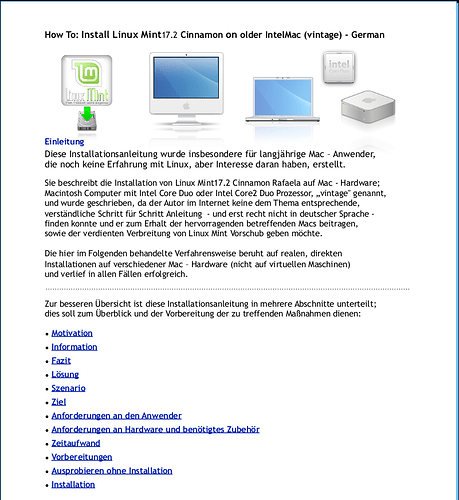 if you see any information missing in the website of Elive (faq's / instructions) I could update them!

Thanx, Thanatermesis
appreciated. Will look around a bit from time to time and let you know