What do you recommend ?

I noticed the same and tried out a lot of things to no avail.
This included reconfiguring the firmware with:
"dpkg-reconfigure firmware-b43-installer"

In the end I left it for what it was ...... and my broadcom simply works, despite those kernel errors. Actually it looks to be more stable/better than before albeit a tad slower..

those drivers are sometimes updated, the question is: does it makes your system broken? (like broken-status of the packages)?

if yes, we will need a way to fix this (holding those -dkms package to never update maybe)

Since all those packages are related to only the broadcom B43* drivers, I wonder if should be wiser to just remove them from the installations for those who don't need them (but in case that they plugs a B43 wifi usb stick, will not work on the fly)

IMO remove them, for now.

The broadcom b43 xx family adapters has some known issues on Debian.
I got it to run with manual install, only.

If someone is interested,
I can check for the how to later on...
Requests ??

I think it has to do with backwards compatibility using legacy kernels....but I'm not sure.
You could try ....... but apparently no one is having real problems excepting the error messages from dpkg.

Exactly, no real problem for me

but not with 5.4 kernel (which i think is going to be used for the next build)

and the question is: is better to use an updated kernel without it (so that it supports more hardware) or to have a little older kenrel with including this driver for those broadcom cards?

the question is: .... including this driver for those broadcom cards

Actually there are, and always has been, some issues with Debian/Ubuntu and certain Broadcom wlan models.
If you can not get yours - after a regular installation - to run,
you are probably effected. Alas.

There are several ways to solve it, but after many investigations
from my side (because I was many times effected... [brmsmac]...)
I found that the most reliable way is
=
check your hardware installed by yourself - from the terminal:
$ lspci -nn -d 14e4: 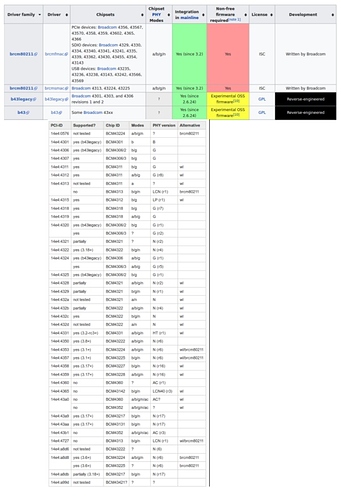 After you did identify your card with the correct driver in this list -
use synaptic to search and install the driver.
.
.

Means: Probably you will not find this particular driver with synaptic.

In this case the brcm80211 package needs to be installed (into the kernel):

then jump to (here in this example I do need the driver for Debian Buster)
Debian -- Package Download Selection -- firmware-brcm80211_20190114-2_all.deb
choose a mirror from the list and download the file
firmware-brcm80211_20190114-2_all.deb
install it (usually a double-click on the file is doing the job)
making sure all is well placed and working ; restart your machine.

Well, Elive includes actually a smart "loader of b43 driver" (please try it if you have this hardware

But specifically talking, the "wl" driver (broadcom-sta* packages) is only one of them (around 5 actually), and a pretty good candidate in fact, so the problem is that by building the iso with the 5.4 kernel, the wl driver cannot be included (doesn't compile)

Well I know macbooks (and they could be recognized as such during an install) are notorious B43 machines but actually wondering if there are stil that many USB versions around.

How often would that be a problem, for it to have this non-free binary blob contaminating the kernel?
Maybe just leave it out until it gets fixed for 5.4 (and later) ?

Never mind .... I just discovered that the source of said broadcom-sta-dkms package was added which allows for succesful compilation.

as said before, the updated pacakges compiles correctly in our actual kernel

but i wanted to release with a 5.4 kernel, and this driver doesn't compile with this one (so it needs to be removed or downgrade kernel, which also means less hardware support

but at the same time these painful b43 wifi's almost never works on other linuxes, so its a good bonus for elive if they magically

the few people who use it, will buy a cheap USB WiFI Stick ?
JF
I think we have more to gain that to loose to go to 5.4 ?

just as "By the way"...
actually it is kinda tricky with specific MacBooks and therefore iMacs (!), too (those got identified as "NoteBook", which is also not wrong, because an iMac is in fact a MacBook just transformed into a Desktop computer)
The issue is here - that 2 different b43 drivers are loaded during startup,
and so many times 1 of them needs to be blacklisted in the conf file(s)...
But which one is the right one ....
This phenomena occurs especially, if the effected machine is used as dual- boot (macOS & Linux). Funny thing is:
When you are close to pull off your hair - just shut down (!) the machine from the Linux environment and boot into macOS, reboot (!) into the Linux environment - and everything works out of the box - like as it would never ever had any issues...
Am still at this point with certain models from before 2012...
(and so what!)

Indeed, most of it.
Still Debian is not the best friend of contrib-non-free .....

the 1-2 days-ago build test failed because of this

can you confirm that you have the broadcom-sta-dkms package installed and the "wl.ko" module compiled in /lib/modules/5.4-something/updates/ dir?

The issue is here - that 2 different b43 drivers are loaded during startup,
and so many times 1 of them needs to be blacklisted in the conf file(s)...
But which one is the right one ....

, unless its bugged or very specific cases (if someone has a b43 not working, please report)

where if im not wrong, in each "attempt loop", it unloads all the b43 modules and try just a single one, if works, it adds all the other ones in the blacklist, this makes the wifi work on that moment and also in each reboot (unless as I said, its not working on the expected way, so i don't even have a single b43 hardware to test with lol, and like you said, there's many different ones that requires a different conf)