Elive needs a reliable application for making bootable USB flashdisks, especially when needing to perform duel boot with M$Windows( Yeah sometimes you have to deal with the devil).
I do not want to use commandline i.e dd - risk of formating the wrong flashdisk and noob unfriendly.
Unetbootin difficult to install and several warnings in its usage about write modifications( maybe i didnt read enough)
Etcher - Needs AppImage: Feels like bloatware, i hate that ( Is AppImage ever a good idea on Elive? ) 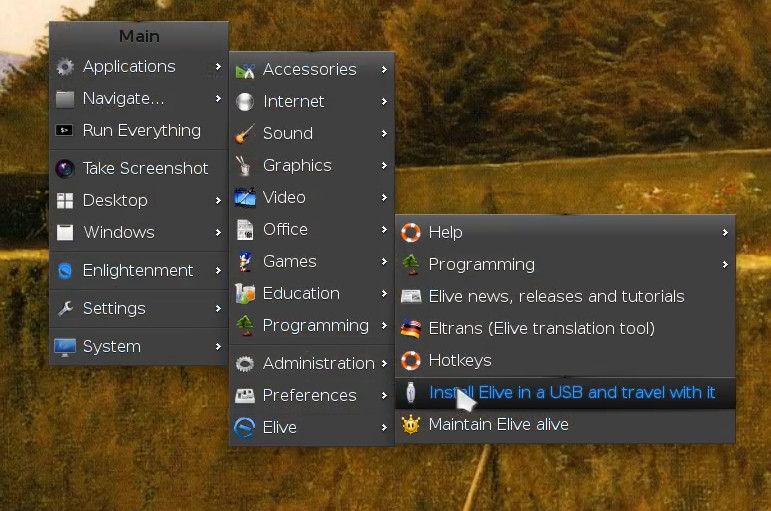 The most reliable way to create an USB stick is using the good old dd (It is my personal opinion, don't need to match with the moderators or others opinions).
You'll need elevated rights anyway. But some tools are not checking/mention the lack of rights. So it seems they'll work and at the and nothing is written. Or they are using a file-copy instead of the blockwise-copy and because the drive is not 'ejected', the filesystem isn't written to the stick. There are so much possible points of failure, no fancy GUI are able to improve.

I'm using GNU On Windows for years now.
List of supported apps: gow/bin at master · bmatzelle/gow · GitHub
No need for cygwin or any kind of higher emulation/virtualization. Only a limited set of commands, but the most important are available though the normal 'DOS' CLI.

I'm hoping for the new WSL (Windows Subsystem for Linux) in Windows 10. But at the moment I have no use for it.

Because I want to make a Winblows bootable flash disk not an Elive one. I presumed that tool is for creating Eliveboot discs. Windows is kind of finicky

A bootable flashdisk is OS agnostic in the sense that it's the BIOS/Firmware that does the job of booting and the disk has only to conform to protocols specified.

not wanting to destroy my flashdisk

No worry, you'll be hard pressed doing that.

I presumed that tool is for creating Eliveboot discs.

Dont worry, it works for normal ISOs, elive works like any other distro

Ah. You'll have to use Microslop's writer AFAIK -- I don't think dd and other tools except the official and maybe Rufus work with Windoze...but i could be wrong

Elive Tool gives me a udf formated bootdisk for the windows.iso but it does not boot by usb because none of the computors recognise udf format . Elive is able to read the bootdisk but Ms windows does not. I have a feeling that the original iso was made from DVD hence the udf format , Elive bootdisk creator cannot convert.

Ah. You'll have to use Microslop's writer AFAIK -- I don't think dd and other tools except the official and maybe Rufus work with Windoze

I am begining to come to the same conclusion

Ergo, it's not a "write to disk app" problem but a filesystem issue.
Do some reading up on udf (universal disk format), iso 9660, el torito and isohybrid boot.
or:

Why Is Creating a Bootable USB Drive More Complex Than Creating Bootable CDs?

Creating bootable CDs and DVDs tends to be a simple, straightforward process, but why is it more complex when creating bootable flash drives? Is there really that much difference between the two? Today’s SuperUser Q&A post has the answer to a...

After extensive reading and research, I have come to a similar conclusion as TheTechRobo that there is no nice easy way to write a M$Windows bootable usb disk in linux. The challenges go even go further when dealing with the newer Win10 whose size is greater than 4GB , a known limit of FAT32 system.

The most reliable method is going bare knuckles with the command line , in a multi step process with a number of disparate CLI tools to creat the boottable medium on the USB.
Windoz doesnot make it easier by preferring DVD/CD based installation media over USB types probably because of the financial harvest they get from selling the OS on CD

The next best Windoz USB bootcreater on linux currently is the Unetbootin application, but its a hit and miss affair with it's own teething problems on a number of linux distros.

There is then an assortment of uninspiringly named linux based bootable USB creaters, the best of which is Woeusb a tool whose development seemed to have stopped 2 years ago

the best of which is Woeusb

Try Unetbootin to write it to a USB, it modifies the files.

But...Microslop seems to be trying to push push PUSH their own tool...If they want users at least support Linux with that tool!