I've noticed, quite a few times that thunar crashes or becomes unresponsive ..... especially when it comes to mounting/unmounting external devices.

This especially happens when mounting large USB3 devices and wanting to see what\s on there....leaving thunar totally unresponsive upto even unable to close it, requiring "xkill" to get rid of it.
While thunar is in it's unresponsive state, copying files to and from the device using the command line or "mc" works fine ..... as well as unmounting with "sudo"... so IMO it's thunar itself that's at fault.

BTW,
After xkilling thunar, it will not restart unless the whole system is rebooted.

This is not what you might call good behavior, let alone stable.

Mmmh, I have not noticed that (so much?), but i have noticed thunar to needed to be killed (don't remember, maybe was the same case). That's a thunar fault of course

and we are the affected ones lol

After xkilling thunar, it will not restart unless the whole system is rebooted.

try this the next time:

Maybe thunar has a kind of timeout set? but in any case it should not "hang"... so there should be a bug

I assume the only way to get rid of this is by debugging the application, installing the -dbg / -dbgsym package of thunar and running it from "gdb" to get later a backtrace. The only required thing then will be to know how to reproduce the problem first

I haven't used Thunar for a while. I switched to Nemo. I was finding, in an earlier Elive Alpha version, that Thunar would hang fairly consistently when I tried to unmount a USB drive.

I cant get it to freeze on my computer,how much ram do you guys have,are you using externel spinning hard drives?

when it comes to mounting/unmounting external devices.

the last versions of elive alpha's/beta's had some dbus things improved, we should make sure that still happens on recent versions (or, this means, upgrade your e16 confs to a new provided one)

I've noticed, quite a few times that thunar crashes or becomes unresponsive ..... especially when it comes to mounting/unmounting external devices.

Encountered similar behaviour but this time it was on a large windows partition. Wondering if accessing the drive is possible with a different file manager while thunar is in hang state is possible without corrupting data. Was in the middle of downloading a large file.

Hmmm, I had the problems with a 3Tb usb drive so that looks similar.

When it comes to large files:
My personal solution is using "mc" aka "Midnight Commander" in a terminal, it has the least overhead, has never crashed on me and visualizes the transfer well.
To install it simply "api mc" and once installed use "mc" to start.

If you've never used it (or anything like it) before it takes a bit getting used to.....but it's extremely versatile. It's the first thing I always install as a safety net on any distro and can run on a Vt too without X running. 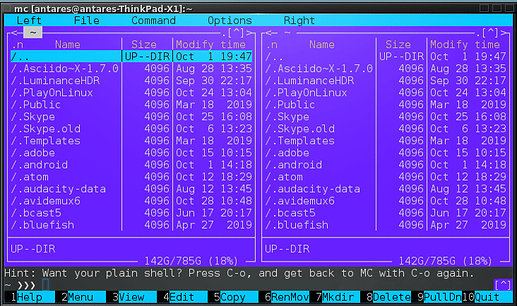 I remember midnight commander used it eons ago on my PDA if you remember those. Loved it. Wonder if is the same thing

Going to try it