Tyler (which has recently been seen on the IRC) made an amazing review of Elive 3.8.4 using the 64bit version:

I profited to improve a few things while watching the video

So, the sentence of the startup applications has been rephrased (minute 1:01), removing the negation words ("add or remove") to make it more fast to understand, I hope the new sentence is more clear now

There's a little brainstorming about the hotkeys thing:

mmh, maybe the pdf should appear on the installed mode too ?

sounds like coherent for the first startup, and maybe WITH the close buttons for the live mode but not for the installed ?

he also was searching for more hotkeys in the minute 15:40, so sounds like it should be opened at first installed-mode desktop

A good bonus for this forum is that he wanted to modify the startup applications in minute 18:20 (like mentioned before) and he went to google, what happened? first result, a howto of this forum explaining it

About the hotkeys, he finally found it on the dock (so its a good place to have it as a launcher!) 22:30

Anyhow, comments about the video:

I like the video.
Good for @Thanatermesis to see, how an (obiviously experienced) user is on the way...

I’m glad this video has helped in some way. I think a lot of my confusion can be attributed to it being my first time using Elive. Displaying the hot keys information at first boot on a fresh install would definitely help with this. As for the documentation, fleshing it out a bit and making a more accessible way for users to view the information is a good idea. All in all though I really quite enjoyed my time using it.

fleshing it out a bit and making a more accessible way for users to view the information is a good idea.

I am of the same opinion but all in all, I think we need a dedicated part of the Website for that ...... maybe a wiki of sorts.

Going through the Howto's on the forum isn't very clear as they tend to get cluttered with replies and thoughts, additions, etc.

Mmmh, maybe we need a specific howto entry here called "elive first steps"? which explains where is the hotkeys, startu applications, which notable / different features the desktop has, how X works, etc... all with small screenshots

BTW I suggested to Tyler to look at the 3.0 stable version which offers a much nicer desktop experience, he mentioned me that he was not aware of the big differences between versions... good point, I think that this needs to be explained / showed better on the website

In fact the website talks a bit about these differences in different parts (the homepage for example, or when downloading the beta version you have a small note reference about that)

Suggestions about how to improve this / on which way into the website?

So actually, in the middle of the homepage we have both downloads without any explanation (problem here?), and in the end of the homepage we have some short explanation (good i assume?), also the Menus of downloads doesn't tells much (users just click on them, no contents possible), but then on their pages maybe a small reference should be put (and to find the ideal place & contents is not easy)

update for hotkeys: since the next build (3.8.8) the PDF of hotkeys will appear in both Live and Installed modes (first desktop creation only), in a smart-maximized mode (maximize without occupy the entire desktop) and two seconds later will minimize (iconify) automatically, so that the user will always have the PDF visible (and so reachable) on the desktop to de-iconify it in order to use it. Sounds like more friendly this way

I personally think that the first page has too much information at once. IMO it should be like a frontpage of a newspaper or magazine i.e a flag showing the (divided) content behind it and letting the visitor make his/her choices on where to go or what to read.
I know others like it but ....... I really dislike the banner/animation at the top. I think it looks unproffesisonal, even juvenile.
I recently made a hasty "sort off" mock-up of what I thought would give a calmer impression, using what is already there: 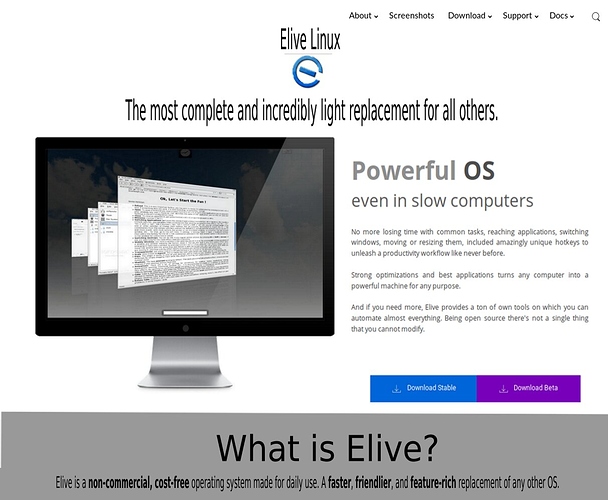 It shows that I learned DTP with paper,scissors and glue.

I also still think that i.e the "docs", "howtos" should be an entire (new) section of it's own, not a link to the forums ..... maybe even wiki style with a select number of allowed editors...... but at the least copy over the existing (redacted) Howtos and tutorials as separate .md files to that section.

As to the downloads for 64bits ...... I think that a button to join the forums and thus acquire a link there might be something to add prominently. After all this forum is the only thing (besides @Thanatermesis 's stamina) that's keeping, and will keep Elive alive.

btw the website needs much better screenshots! lol, sometimes i try to use one and realize that there's not

The slider thing is a little controversial thing, it is good and bad at the same time lol, maybe it should be put in a different place...

the hardest thing making a website is the difficulty to see it with the same eyes / view as the new people that enters on it, without their already-known information and without know their "novelty feelings" and reactions

BTW @triantares did you see the results of the poll?

User's feedbacks from the website it was interesting, we can create more polls too

but i dont think we need too much at the moment

Whoa ..... maybe we should morph this into a new thread?

we need a specific howto entry

Agreed.
Voted, because it's an important thing

We direly need to build a (small) team to do that i.e create a test version, correct it for language and mistakes, categorize them (stable, Beta 32bit, 64bit, E16, E23-Enlightenment) and when ready publicize.

Exactly.
I am onboard.

I could help out... not too much, but things like grammar I could do