Succeed transffering to bullseye. using E24 ( Prefer it to E16)
Network manager connected in the background and works correctly, but I lost "wicd" gui (error msg is there is no available package in bullseye repo). So now I cannot switch between networks . Seems wicd was dependent on some python2 libraries.
nm-applet opens only once on each login session and cannot be restarted again. Its a pain in the neck. I can connect with nmtui but , would love wicd if possible

You need to replace 'nm-applet' with 'conman' for E25 if you want to have a control widget in the taskbar.

You would uninstall a lot of other stuff that depends on it of which cairo-dock is the most prominent on Elive. In that sense, it might be an idea to look for another dock to have available for E16.

"nmtui" is just a terminal ncurses interface to NM as the name shows, so: No nmtui will not be usable as that will be removed too. EDIT Since "network-manager" is a daemon .... you could see if stopping/de-activating network-manager makes any difference in your case. On my machine it o…

Succeed transffering to bullseye. using E24 ( Prefer it to E16)
Network manager connected in the background and works correctly, but I lost "wicd" gui

Just to remark that it is now possible to have 'network-manager' in use on E25, with a little workaround.

There's a way to get 'network-manager' to show up in the E25 systray, which will show in the ibar thus:

by way of using the following command (in a terminal):
'nm-applet --indicator &'

Where 'network-manager' will have all its normal functionality.

by way of using the following command (in a terminal):
'nm-applet --indicator &'

This no longer working . It gives this message and exits, 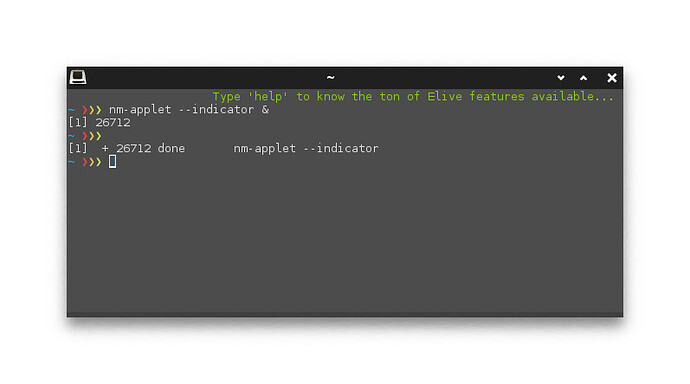 This no longer working . It gives this message and exits,

It still works but;

Personally I run it (with others) in a separate shelf.

nothing happens or appears in E25 systray

The trick I use to have it show up on every login (i.e NOT requiring me to manually start it every time) is to: