Somebody asked me recently the 64bit link for write a review about Elive, he also mentioned that for the other download never received a reply, later giving me more details I found that the download of the 32bit version simply didn't worked (it worked on the stable page but not in the beta one), that was due to some strange voohdooh crappy wordpress changes probably from an update. I don't know how many time has been broken since then. This means that in the download page of the beta version nobody was able to download anything (unless donating for the 64bit version), and this has been this way for long time

This is really sad news and makes me really upset, why? because it affected thousands of people and nobody reported it before (users enter, try to download, not works? they leave, only a really small percent of people are able to report it), their experience was simply "thats shit, asking for donate for 64 version with a fake download of 32bit version"

How to know when these things happens? there's not really a way, the only way is to try from time-to-time everything to see that they are correctly working (which sometimes I do, but of course I cannot try everything every day), this means that if you want to help betatesting these things that never occurs, just try all the "new user experience" as much as you can, so for example:

Well, happy that the bug is fixed now, and sad because it happened to thousands of people leaving a bad and empty taste about elive, fortunately I kept the direct download for a good amount of time (almost a week I think) after the distrowatch announcement before to switch to the delayed button

Another bad news: the direct-download button also had a bug, which affected to the 50% of the users located in US or the entire america's when one of the mirrors was down, this issue has been fixed too 2 weeks ago

and this has been this way for long time

Support BunsenLabs with a direct donation or via affiliate links

BunsenLabs is created and maintained by volunteers – we do this work because we love it, not for money. However, keeping the distro available online does involve some costs, for example, renting a server and registering the domain name.

No-one need feel obliged – or even expected – to make a financial contribution, and many people support the project in other ways, but if you would like to send us something via PayPal it will of course be most welcome, and help us to meet the costs mentioned above.

Good Idea. But I really don't download this much. Every download costs cpu power -> bandwith -> money ...
Here what I've done in a similar situation for a company I worked for:
Setup Nagios and do:

There was no WordPress involved, but a lot of wannabe designers, devops and admins with too much rights. So they broke the (public) site with the downloads for the customer weekly.
After that, if Nagios got no 200 (Link OK), a mail goes to the marketing and they set the IT department on fire.
Mabe we clould skip the part with the fire.

I was thinking about something like that too, but what about if the link is working properly but the problem is on the wirdpress side, which does not notify the server to send the iso after the 4 hours wait? How could it be accostumed to the issue? If you know i can write a tiny script and run it in my home raspy server so i check the link every xx time and send an email to @Thanatermesis if it is broken.

For that I need to analyze the WP plugin ... I don't know at this moment what is easier, to check if the system is working or to check if it is not. Depending on how it will be triggered and what is the response.
Is there something like fail2ban? This can also get false positives in nagios.

Actually we should ask ourselves why this "go between" using email for a link is there in the first place.

I think requiring a little action to download 64 bit (aka take part in the forum or create a review) and have the donation option open if you're happy to put up a bit of cash to avoid hassle...... fine!
But put it on the site in that order ..... NOT the donation first and then the way out options, do it the other way round. Did I mention that we need a special link for that ?

Growing our online community is the only way out of the current impasse be it financially or dev/coding aid, IMHO.

people should be to download at minimum the 32 version without email, personnal info etc... I would prefer both versions but you already know that LOL I won't "PYO" again with that.

As @triantares said " Growing our online community is the only way out of the current impasse be it financially or dev/coding aid, IMHO. "

I was thinking about something like that too, but what about if the link is working properly but the problem is on the wirdpress side,

yeah exactly, the problem was not the download or the donation features, but the process feature to download, more exactly the feature that inserts the email in the database to wait the 1-2 hours . So what should be to be tested is:

the issue was caused by WP itself or some related thing to it, more exactly the rendering of a shortcode made from an element or from the raw-html element, it rendered correctly, but it didn't worked with the second one (no email inserting in database, so nobody received anything)

Actually we should ask ourselves why this "go between" using email for a link is there in the first place.

yeah, that's why they are added only if they confirm and not directly by getting the download (you can betatest the entire process), in fact it has different friendly cases:

yeah, I tried that during a ~ week in the release moment, it worked good (but saturated a bit the mirrors, @yoda noticed them very slow recently), but seems like it works even better by requiring the email (better marketing in long-term, more people updated)

Well maybe it could be made with selenium (with python is the easiest) for automating the click and insert mail part, then always from python it is possible to read/send emails from a dummy account (like enabling some unsecure settings in the gmail options). if, let's say within 3 hours, there is no update in the email inbox the bot sends a mail to you saying "it is not working!".
It is not impossible to be made, but i would require, in my opinion, 3/4 days of writing and testing.
Unluckily i am taking care of a project for university at the moment and i could not take care of this too due to the big lack of times

yeah that's the problem, "too much work"

, and there's many things that can be tested lol

but yeah i have some other verifications too, like a stability checker of mirrors or simply lots of "warning emails" to be sent in case something unexpected happens on the server (expected unexpectance in fact lol)

. NOT the donation first and then the way out options, do it the other way round.

if user is already subscribed: just gets the download

I think that should be very explicitly stated, i.e explain very clearly that, by giving the address (aka subscribing) it will be remembered and thus avoiding waiting time for the next download.

Also be clear that "waiting time" is only there to keep a load balance on the servers, as Elive doesn't have enough funds to rent unlimited bandwidth, etc.
It's all about explaining, being transparent as to why Elive does what it does. aka taking your (hopefully) furure community members seriously and letting them know that.

Frankly I don't really care about why a thingy works or not.....that's a techy (WP) problem. If it doesn't work (and this goes for hardware too), first thing I do is ask myself what it's for and if I really need it.
If the need isn't a big thing I simply remove the stuff (KISS) as little badly-working extra's generally lead to a big not-working mess.

And indeed, as @yoda quoted me, we need to grow the community and do it fast.
Everything else has failed to generate anything else but too little funds and a bad name as a "nice but a not for free, forever beta distro".
Elive needs to be THE place to go to if you want to have an Enlightenment Desktop aka the de facto flagship.

On a techy side:

Aren't there already existing, ready to deploy Python modules that do that, available ? @stoppy98 ??

Yeah, I was trying to download both 32bit and 64bit... and that happened. My download kept crashing, the 64bit only crashed because my wifi went off for a second, but the 32bit one kept crashing over and over after a certain amount of time. I eventually got tired of that, and downloaded it at a faster wifi place so it would be faster, even if it did crash.

It's all about explaining, being transparent as to why Elive does what it does.

This is correct; if you watch Switched to Linux's video on trying out Elive 3.0.3 he definitely complained about how he's a privacy guru, doesn't want to give out his email...I think that would've been avoided if it was more transparent.

I stopped watching him after that.

I think that should be very explicitly stated, i.e explain very clearly that, by giving the address (aka subscribing) it will be remembered and thus avoiding waiting time for the next download.

, so I will simply show the results of the implementation instead:

Users will receive a different message when requesting the delayed download, which are different based on their subscription settings, so: 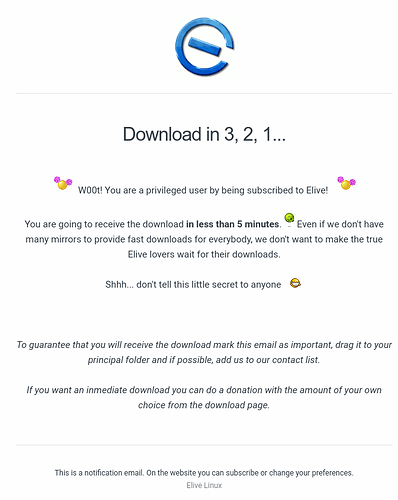 (and so yes, the download is then received around max 5 minutes later) 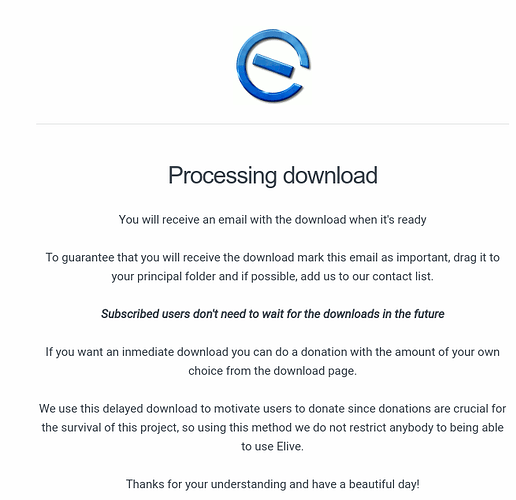 note the bold part of the message, which refers your mention to "saying it clearly"

Plus, the confirmation email is re-sent on that moment too, which looks like: 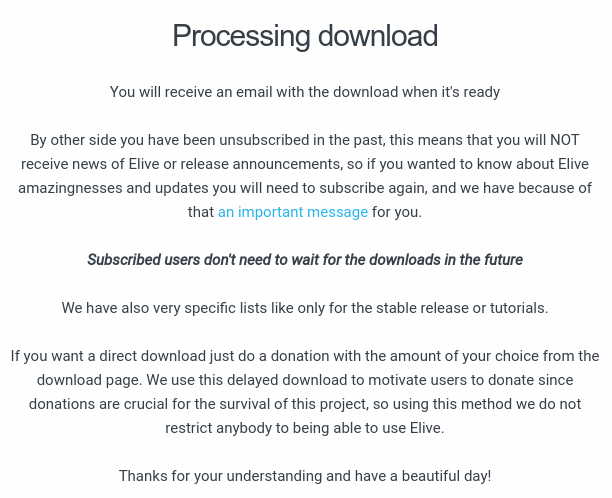 and so this is the link of the important message

Very, very nice ........ I like it and it's what I had in mind.
There are some grammar changes and beautification I'd propose but for now it's good enough.

Naturally, these messages target those that have already decided to interact with Elive and acquire a download .... So methinks the website should clearly state these things to new visitors too.

Especially to draw in those that are still in doubt or expecting a "one-click" download.