Does anyone know where I can find drivers for old Wifi cards? Mine is not recognized at all by the OS.
I am installing to a Dell Inspiron Mini 9, which is ten years old and used to run XP. The wifi card worked in XP, so that means it’s most likely a driver issue and not a hardware issue.

You can use drive booster from obit.com its free. This is for Windows OS only though.

Mots likely you’ll just need to add the firmware. To define what firmware is right, we need to know what card your system is using.
Before I start to google what is possible in the ‘Dell Inspiron Mini 9’, I’d like to ask you for some homework.

see, there is no wifi in my desktop …

Maybe my idea was too easy. It is a Broadcom Chipset.

But there is hope anyway:
https://joeyh.name/boxen/gnu/#index3h2

The solutions in prefered order:

Is the broadcom driver that bad?? Ahah

But the NDISWraper Team does a great job. Even it is bad to support closed Firmware in a open OS, you are free to use given Windows Driver with only a little efford. But if you want to use monitor mode or other advanced features (Sometimes just the wish to use german 2,4GHz WIFI Channels, not allowed in other countries) you are lost…

But take a look at the other solutions. For just 30 bucks you’ll get a intel card with native driver, within the Linux kernel. The replacement could be done easily, if you are able to disassamble a toaster and/or your Laptop is listed at ifixit.
This solution override the need go discuss how bad or good any company or chipset is.

Edit: Written on a mobile, at a hotel in Mallorca… Sorry for the typos.

Yes, try the ndiswrapper configurator included in Elive (graphical) you may have luck installing the windows driver to be used with it

It is possible that Elive 3.0 doesn’t include so well pcmcia support, so you can try to install any missing package to see if there’s a missing one (on such case report it to include it in the next versions). If im not wrong the installer also asks you if you want to remove the pcmcia support

But yes, I have see a few wifi drivers that was not possible to include in 3.0 that was available in 2.0 (but also there’s much much more wifi cards supported in 3.0, specially for newer hardware)

It is always a chance a card could work or could not work, on any system. It is more probably that a card will work with a system/kernel, build around the same time. But there is no guarantee.

But there are many compatibility lists. My bookmarks are all empty now, but google says:
http://linux-wless.passys.nl/query_alles.php
https://wireless.wiki.kernel.org/en/users/drivers

The third step is the most difficult, because the firmware isn’t opensource. So it has to be found by google and copied to the place the driver wanted (f.ex. /etc/firmware/).
Cards with Prism54 chip is always a good idea.

Well, I have see also a few (2-3) drivers that didn’t compile on newer kernels because they are not maintained anymore, maybe the kernel introduced them with a different name, who knows? but not with that name are compilable anymore in any case…

In any case, if there’s a missing wifi working on newer versions, and you are able to manage to make it working, please report the how to include the support on Elive so that it will work by default to anyone

How do I connect this solution to this thread? Is there any function similar to ‘duplicate’ (known from stack overflow) or ‘merge’ in this forum? The topic really seems to be the same.

Since I deal a lot with Apple Mac
I got a rich choice of (unwanted) experience with Broadcom drivers, I can tell.
Fortunately we are on debian and there are some useful how to s for getting
a solution. Google for it with the name (see below!) of your wifi adapter.

You really need to know excatly which Broadcom you do have inside
otherwise you will waist a lot of your rare lifetime for nothing and none.

Now you can find the CORRECT driver for your 14e4:4320 (see the output from above) in the following table: 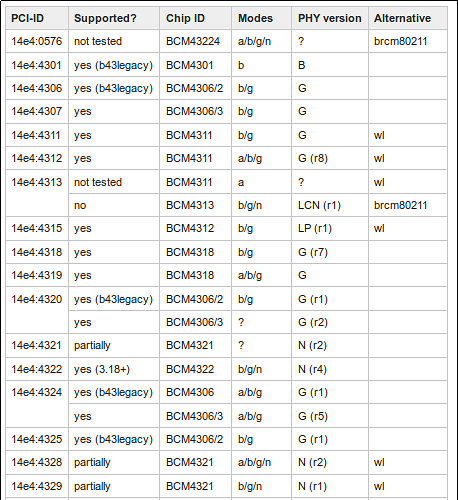 (Debian says:)
_
These drivers are included as modules in Debian kernel images.
But
Firmware from userspace is required for device operation.
Firmware is not packaged by the Debian Project.
It must be downloaded and extracted, which can be performed by the
[firmware-b43-installer],
[firmware-b43legacy-installer],
or
[firmware-b43-lpphy-installer] - packages during their installation.
An Internet connection is required.
_
Thank you Debian....

Mhm, ya.
Now you have to google for the pending firmware installer and install it.
Read also the instructions at the debian site:
https wiki dot debian dot org slash bcm43xx

It will work, dont get frustrated -

or switch to the easy way out;

But
Firmware from userspace is required for device operation.
An Internet connection is required.
Thank you Debian....

PD: This is a very nice graph! It can help anybody having issues with these drivers, if they doesn't works in Elive:

As you say, to configure them is a real headache, even worse, it is possible that every different version of kernel and module work or not work in the same card, I remember since the first times of Elive that, like you said, each of these b43 cards requires a different driver...

Solution? Elive includes an own tool that when these devices are detected with the lspci command, first test if the wifi works, if not, try to load and unload every different driver, if not, try to load a temporal backup of the firmwares, then try's to load every driver until the wifi status appears to work, finally, when the driver is working, saves the configuration to the system to always use it

But user's don't see this... they just see their wifi working lol

Great stuff !
this is one of many, many other details that made me crushed on Elive ....

(nice piece, by the way

this is one of many, many other details that made me crushed on Elive ....

The bad thing (speaking in the marketing / promoting sense), is that nobody knows these amazing features (and much more), the Elive website has a list of characteristics which looks nice and attractive but it is not enough in comparison to the how-much unique features Elive has

It stills in my TODO list to make a lot of sub-pages from a menu called Features showing every feature of Elive, but this is of course a ton of work

Yes, sorry for the delay, I still have it opened in a browser Tab waiting to have a bit of dedicated time to be able to answer it more correctly with every detail

since it's a big and important topic

While I haven’t reviewed the details for this specific card, I make it a habit of doing commands like lspci & lsmod, or just thoroughly knowing the hardware I’m using, building in the specific modules into the kernel, & using wpa_supplicant for the configuration.
Of course you’ll also need to have any necessary firmware installed as well, but this process normally solves most issues I’ve had.