Persistence do not save some configuration

I have some problems, because when I instal or modify there is not problem (works), but the problem comes when I restart “there is nothing!” as:
iBar… It change to default
Synaptic… I can not update
Changes in screen not saved

I am using as website explain, the 3.0.3 USB (img), persistence selected in running from USB, etc

I do not know what is the reason for that… Can any guy help me ?
Thanks

Glad to know that is a pretty useful tool for you

Mmh sounds like your hardware-based profiles are not correctly detected, but this should be easy to fix by simply updating a specific package (i should do a few tests here first before to suggest you it)

As for the synaptic part, it sounds like a strange problem that i have seen with the repositories (a nonsense / without reason problem), does the command “apu” in a terminal also shows updating errors ? (try it twice)

Many Thanks!,
I send to you what command “apu” shows as "

See if this command solves the problem, should update fine and the package manager working too, please confirm it so i can solve it in an update for everybody too

Ok,
I test it, It seems working fine!!!
What I do:: (In persistence mode)
first I open Terminal and “apu” to test if it fail again: 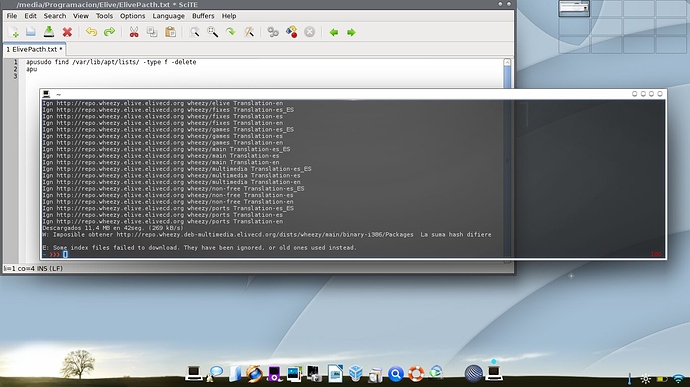 It seems to work fine!! It is ok?
I test with Synaptic package and works without problem… I do reload packages without problem and mark updates and apply also without problem.
May I do anything more?
Next, Store Screen configuration
Thanks

Thanks, I have included a fix for the automatic upgrader tool of Elive, you should see a notification in your desktop in the next days with this fix that will happen in all other Elive systems (I have mentioned you on it

About the screens configuration issue, you mean simply the “resolutions” like elive-multiscreens tool? Or the entire desktop configurations ? (which basically means: that everytime you boot in the same machine you need to configure again the desktop, with the languages and keyboard and etc… )

Hi,
Thanks,
About Screen configuration:
I have assumed that everytime I boot in the same machine I need to configure again the desktop, with the languages and keyboard and etc… Obviously if this issue can be automated, it will be better.
I means:
When Elive runs, appears as:

Then I modify to get this:

When I restart to Persistent mode, all changes dissapears to returning to first one.

Ok I see, let me investigate the issue…

In the meantime, can you show me the result of this command ? (from a booted Live mode with persistence enabled and a previously desktop configured for this machine):

BTW, do you used the USB or the DVD download?

Oppss!
As I remember I use the Elive transport with you 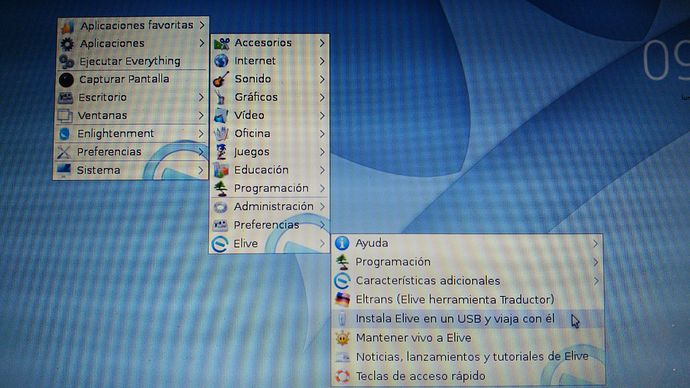 Ok so let’s assume that with the tool (reading the code seems like to ask if beta / stable and dvd / usb), you picked “stable” and “usb”…

I’m doing now a new updated build of 3.0.4, give me a bit of time that i test the persistence feature with remembering desktops and i will write back here

Hum… crap, this forum changes the characters that I originally wrote, the " chars are " chars and not other ones looking similar ! damn…

I have no way to write the correct " chars, so let’s try this command instead:

Hi,
With new command I get: 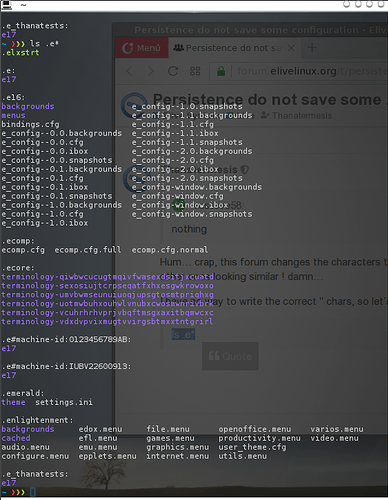 Perfect, do you see the "machine-id" entries? these are desktop configurations related to unique machine identifiers (re-usable per every same computer), so the feature -should- work, but seems like it is not working on your side... that's strange, I will need to do more tests here

BTW I just fixed the quotes things in the forum, it was a new setting "typography feature" that I turned off

Hum, I tried it and I can reproduce the bug, at least with some updates made, but it works after the third boot in persistence, more exactly:

Mmmh, i need to do more tests

Can you confirm that after the third boot stills no desktop saved ?

Well, I have fixed the issue and Im going to make a new build soon, but basically there's not much changes! in other words, the feature simply works correctly but it needs a third boot to have re-used the desktop in the same computer

The tool is improved and it will start now recording since the second boot (first boot = create persistence layer, then boot again and it will start recording everything, so that the third boot will automatically login in the desktop without configuration asking)

After a few more tests I have see a few more issues with persistence related to the encryption mode, they are fixed now but I suggest you to download the next version 3.0.4 to have all them fixed which includes also other small updates and fixes, it will be released in the next days, make sure to be subscribed to the newsletters release announcements