Can anyone help with setting up Multiscreen on the 64 bit Elive release?
If I plug in one terminal on HDMI and another using VGA at boot both screens display until the message OS clean..............
then the VGA screen goes off and does not return.

I tried elive-multiscreens but it only displays the HDMI terminal VGA has disappeared.

I am in the dark on this one. Is it just a matter of plugging in two monitors?

I always had difficulties too with my HDMI/Display Port + VGA screen, but, ended up doing something I love !

On my Viewsonic 32 (approx) curved screen, I have 3 Applications that I always want on the screen... so I STICKED them. The 25% left of my screen , I have different APP on 3 or more Workspace...

So when I move to workspace 2,3,4, my eMail, 2-3 other AppsI always visible, as I need on the screen all the time, and a portion of the screen has a specific APP (in each Worksspace / virtual destktop)

At the end of the day, one screen less on my DESK and I would not return to 2 screens ( THAT i HAD DURING 20 YEARS)...

Sometime I have 5 workspace with each, a specific APPLICATION, but all have let's say 70% of the sreen taken by some Apps I always want / need in front of me...

Above that, I " Iconified " some Apps at the top of the screen and click on them when needed....

JF
so : Iconify, Stick some windows and Workspace (Virtual Desktop ) is doing that magic....

Thank you for that and I will look into that. The reason I like two screens is because I use one for my editor and the other for an array of terminal, browsers, manuals etc whiilst programming or HTML work.

I had to ask for a larger font as I have difficulty seeing small screen areas.

Wonderful, that would be great. For me its 4:52 in the morning and I have to go to my Bakery to start preparing for the day of Croissant, Bread and Pizza.

I tried to create an example for you.
THe app on the right is the one that changed... Notice at top right, i am changing virtual desktop, but 3 Apps always stay on the screen...

Otherwise use the "arandr" tool and enable the "outputs" and set the sizes and positions for the screens in there.
On E16 it's "preferences", "screensettings"

Thanks, yes understood that I will have a play around with it. Gave it a quick try in between baking.

Yes I understand that but arandr only show that the HDMI1 output is active all of the others are inactive. The hardware is obviously working because on initial boot both display come on. Something else needs to happen. Several people on various forums have this problem, so far I have seen no solution. However I am tenacious.

Here's a video of how I do it by just connecting the HDMI screen "on the fly" :
https://gofile.io/?c=gaEfOw

It's a quicky so not edited or refined, so some stupid pauses and such but shows the gist of how to do it using the "screen settings" (aka arandr) tool.
Naturally dual screens have to be enabled in the BIOS/firmware but I suspect they already are, seeing as you saw both react during boot and had them running previously.

On my Viewsonic 32 (approx) curved screen

The only problem i ever had was when arandr was not supporting fullHD (weird). Now it works fine and i do not get any problem. Setting up multiscreen with Arandr is pretty quick

may be it works

No I tried that. However something else I discovered. I have hdmi and a D connections. When both are plugged in the HDMI and the D connected monitors display text untill the Elive_OS .......... Sequence shows on bothe screens then in goes off on the D connected one, never to return.

I then unplugged the HDMI and re-booted and did the same. It displayed the exactly the same up till Elive_OS...... and went blank.

Actually I have never used a D conector before with this system always HDMI. So tomorrow on my day off I will see if I can discover why it is not recognising the VGA display after the intial boot.

Thanks for all the tips received so far.

i.e are actually one and the same.
On my laptop being 2 seperate connections, they create HDMI-1 and HDMI-2 and can be done/configured after logging out and logging back in again (effectively restarting the Xserver). 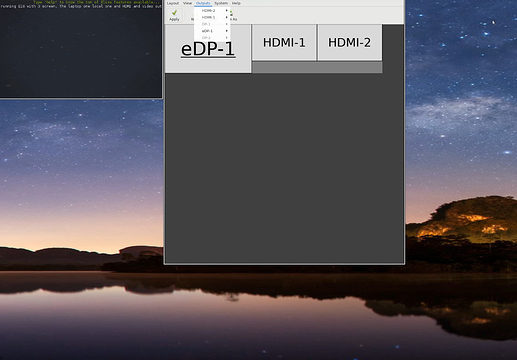 And make sure, if both screens have same size and resolution, that they are not superimposed on another in the "arandr" tool.

Another try and error procedure that helped me (temp) before:
After black screen exchange the displays
(via adapter, if possible)
.
In my case the second display became the main display and does not recognized the other one anymore - it was a ARandR issue... ( solved meanwhile)
.
I assume that you are using a Notebook (?)
Asus ((?) Ya?