In a very hurry days, we have a new pretty much improved release:

I just uploaded the version 3.8.8 with a big rework on the nvidia drivers and much newer versions too. Tesla (nvidia) cards included too, so now we support a much wider range of nvidia cards. Ati has also been tested in a card that I had around which I used to test (fglrx doesn't exist anymore but it works by default with the provided drivers, well, at least for this card model! of course)

Many small fixes has been made in the installer too, bluetooth integration, download-buttons (website) stability fixes, included 2 kernels by default since now in both versions, autostart applications better managed, e16 small improving in removing "desktop artifacts" (if you still had some of them), cd music icon smaller, dark theme with bigger fonts included, hotkeys pdf includes a better UX, able to create users with non-ascii characters, automatic internet availability for wifi connections (if previous elive installed), installer will switch to the users language correctly, blalblabla

this changelog is just for us, I will publish it "publically" in the next official published release

Used "zsync_curl" with 3.8.7 as reference and only needed to download the changes.

SO it's the same thing, if I want those changes, I need to boot from USB and UPGRADE ?

What I missed of windows is than when we upgrade " everything " is kept as is...

In linux, I have to backup some config files sometime etc etc

If you simply "apug" and reboot you will be UPGRADED to everything new, without losing anything. Only the version number in your Grub menu will stay the same.

The iso is "only" if you want to boot into a live mode session or run an install/upgrade/crossgrade/migrate session, say for testing purposes.

@Thanatermesis told me a few times some " stuff" can't be updated trough apug, that an UPGRADE is required, I don't remember which thoug.

Yeah, like he version in Grub and the versions stated in /etc/lsb-release as well as /etc/elive-version not sure if the kernel is automatically upgraded as I was already running 5.4 ... it could be that.

When rebooting, "elive-upgrader" should run as a script ... otherwise you can invoke it yourself.

Whatever you do, if you don't want to lose personally changed stuff and/or configurations on a workhorse computer ..... Do not upgrade using the iso but give it it's own partition or dedicated machine. You'll even lose "enlightenment" if you haven't added that to "packages-to-retain", probably forgetting some and losing others that weren't from Debian or Elive repositories.

Thank you so much for your intense hard work. The more I use Elive the more I like it. It grows on ones use.
Be getting my HP Z840 tomorrow (dual proc; 64 GB RAM ) and be using it to test out 2x 970 Pro NVMe on a HighPoint SSD 7101A-1 raid card and see what I can achieve
Btw: did a apug in case someone is interested 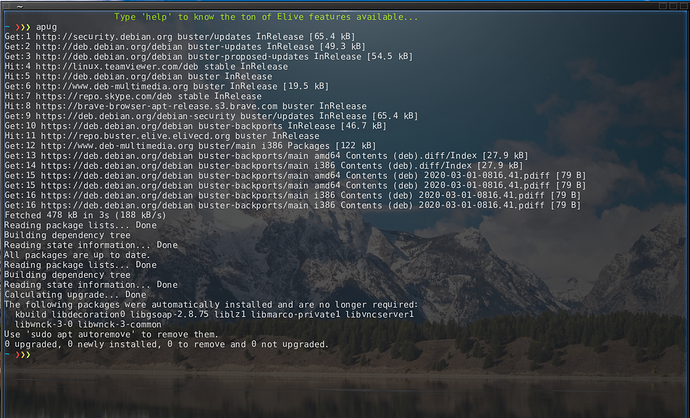 WOW.... Cool
Give us some feedback

Yes @yoda, I certainly will; used that card on my Mac Pro 2010 which sadly "died"

First install (full) for the eeepc 1015pn: one black screen less near man.db at usb boot:

;
During installation, if it possible to avoid black screens, it should be nice, or at least with a thing to wake it up each time a new window comes (with in this case an advice about it to the user at install'launch);
Conky still overscreen on this machine but it's ok at E relaunch;
A little thing that was already in precedent releases: the window to setup trackpad's preferences is not valid-able if not moved up, due to a conflict with cairo-dock...

due to a conflict with cairo-dock...

Yes, cairo-dock is very possessive in it's approach to reserved space.

If E16 were to become the final desktop for Elive (it wont), we would have to find or code another dock but for now we''l have to make do with it.

This one installed perfectly on both my Asus g50 and the G74! Also programs are now installing properly with G-Debi package installer. So far I haven't seen any problems! Both computers have SSD's and Elive is very fast! Thanks!

I ran elive-upgrader on 3.8.2 and no console output. But no error code either.

Is this normal? How do I upgrade elive?

Do "apug" first to have all the updated packages then:

How to update your Elive, the correct way FAQ

There's different ways of updating your Elive: Suggestion: just reinstall newer versions in upgrade mode elive-upgrader: This included and own tool takes care about everything, you don't even need to worry or use it, from time to time, your system will be updated with fixes and improvements apug: This alias for terminal simply runs an upgrade from apt, if you want to get updates manually tip: alternatively you can use: "elive-upgrader --upgrade" reinstall (upgrade): some changes (impro…

What I missed of windows is than when we upgrade " everything " is kept as is...

so elive is better than windows on this sense, because you can:

This means, for example I did recent improvements in the default config of smplayer, this means that you can do nothing and having everything kept as is (to continue using your old config / own settings), or to update your smplayer conf to have improvements on subtitles, rendering, and stability of the player... but it is your choice! windows doesn't offers that, not any other distro offers that, they all: kept things just as is as a SINGLE option

And finally, if you want advanced mode you can read: How to update your Elive, the correct way

quote from the howto:

How to update your Elive, the correct way

You don't need these things at all, Elive is a rolling release system just like debian and you can manage it in the same way, these described things are extra and unique features of Elive which nobody forces you to use, you don't need to, but if you want to enjoy of every extra Elive added feature in every version, you must understand how it works / how you can do it

In other OSes, you don't have default user settings, you have just the application, and even if its a bit preconfigured, you cannot update these configurations to your user. Also other systems doesn't feature a rich installer like the Elive one which takes care of upgrading your installed system saving your users, confs, files, and services, and of course not a migration feature which converts another OS to an Elive one

@triantares I feel like answering the same question multiple times or there's a generic confusion about "why to upgrade" related things, do you think this part needs a better wording or a different explanation?

maybe a FAQ entry with that? (i assume that is better to have it in the howto directly, so to explain everything)

@triantares I feel like answering the same question multiple times or there's a generic confusion about "why to upgrade" related things, do you think this part needs a better wording or a different explanation?

maybe a FAQ entry with that? (i assume that is better to have it in the howto directly, so to explain everything)

Yes, I think a fixed entry in FAQ and HOWTO department is called for.
It will still be a recurring question considering we are in Beta phase but even so we'll save some time and typing by pointing to the HOWTO first and then seeing if it is indeed a "new" upgrader issue.

improvements editing it are welcome

@yoda that FAQ also answers the previous question too

when I have a minute I will read it again to see if this FAQ is simple for a normal user...

During installation, if it possible to avoid black screens, it should be nice, or at least with a thing to wake it up each time a new window comes

This means that the screen saving is enabled by default, which is not needed in Live mode... no worries, the next version will have it (forced) disabled

please tell me @Franc if since 3.8.10 it still having black screens for you

I ran elive-upgrader on 3.8.2 and no console output. But no error code either.

Is this normal? How do I upgrade elive?

yes this means everything is updated