I’m strongly working on it, being able to have Elive running on 64 bits soon !

I will write an update about this soon

With which kernel are you working atm?
I’ve got a few unused thinkpads lying around that could be used for testing.

My Helix2 works fine with 3.02 but I don’t use it much due to very noisy fan and the tablet is coming apart. So that’s available for as long as it lasts.
My X1 carbon (3rd gen) will not run elive nicely due to graphic problems and wont recognize the quirky Fn keys. So there’s a challenge too.

On top I’m still contemplating a minimal 64bit install running 32bit elive3.02 virtually using “xen” in the way QubesOS does. I like their method but the desktop just looks horribly outdated Alas I don’t have enough free time yet to get in deep.

With which kernel are you working atm?

My Helix2 works fine with 3.02 but I don’t use it much due to very noisy fan

A noisy fan could be good for these first tests, since Im using e16 the cpu usage should be almost nothing!

My X1 carbon (3rd gen) will not run elive nicely due to graphic problems and wont recognize the quirky Fn keys. So there’s a challenge too.

Heh I know the feeling… yeah those updated Intel cards are not supported on 3.0

I have not touched yet the install (at all), still working on a base & working first system, it wont include anything so maybe is a good way to have a base to install anything / as any user wanted way, actually I’m just finishing to make the desktop entirely usable and minimally elive-featured (but yeah, e16, this change a good amount of things too!)

Also Im trying to catch a single but annoying bug that crashes the desktop from to time, but I have very hard to reproduce it ! lol

I have reinstalled my main system with this 3.7.x (in development) version, fully 64bit

The copy of the data was a bit boring, specially since apparently we need to stop using reiserfs, this is a very bad news since it is a very good and fast filesystem but seems like to be entirely abandoned by the kernel developers, not supported at all but even worse: it crashes your entire system (kernel crash) if you simply use it, so will be needed to backup the data and copy it back to the new filesystem system

The good thing is that now the preferred option is btrfs with transparent compression in zstd algorithm, and the overall system is pretty fast, with this filesystem your data takes less space and its also faster to access to it (system faster), my disk has been shrinked in almost half of its size with the same data

Now, the E17 desktop is entirely unusable, E22 is not customized by Elive but E16 which is retro is perfectly usable and customized (not the same features but perfectly usable), I had a little strange feeling using it at the start but now i'm working fluid from it, which is well integrated for Elive and also uses the same hotkeys, its just amazing how light, fast and strongly stable is this underrated desktop. Also it features "sound theme", which you may find funny or annoying but you can disable it. The look is somewhat dark at the moment

Finishing to make a few things more ready atm, but as said, E17 is not usable, so bad... Anyways, everything is correctly explained in the system / installation / bla bla

Are you using any special e22 version?
I was thinking of installing the same E22 on my Ubuntu and seeing what they did better or dead wrong compared to us.
Comparing the results definitely might be interesting.

E22 is not worked at all (customized) by Elive, and in fact im using it from the debian repositories, so it should be the same as the one can use

Well, "did better or dead wrong" is very relative, let me summarize it:

In short, yeah, try it and customize it, you can perfectly use it as your stable desktop, but the experience will be simply different than Elive 3.0, not bad but different, will be happy to see a feedback of your experience

I tried using e22 from core/efl.git - EFL core libraries
but keeps conking out in "make" ..... any ideas? 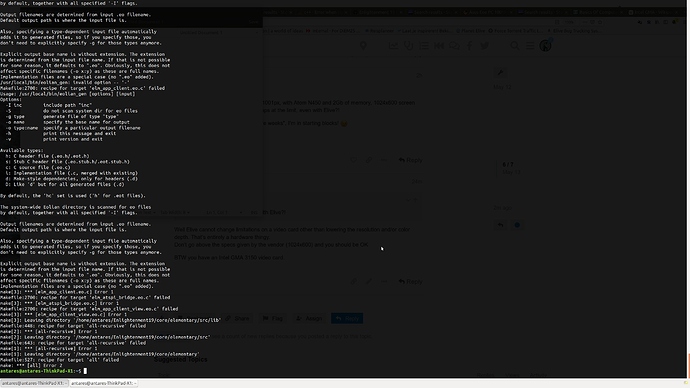 You are very adventurous to try to compile it lol heh

I would suggest instead to use the provided debian packages (yes, its now available from the debian repos):

noticed the "Installed none" in my terminal? yeah, im just using E16 atm

hmm, ubuntu only offers e17 so that would require me enabling buster repos. That's asking for trouble.

Yes, mixing repos is trouble, mmmh... I suggest you to just wait for the 3.7.x build then, I mean, much more faster for you to try e22 and less trouble

Actually this time I think it's me that is getting bitten by a wrong flag somewhere.

Just a preview of the startup designs:

I like it, it has a smooth and unclutterd look and feel to it. Very nice addition to allow for e16, enlightenment and kodi through the menu.

It's a pity that all my laptops are 32bit ones, but in the other way, its thanks to so that I discovered Elive by hazard looking for a light 32bit Linux distro that replaces my old one (Antix).

As my wife's PC it's 64bit system (dual boot Win7+Debian 9) I would test a little bit when beta arrives but only in live mode. I dream to change her Debian 9 to Elive someday

P.S.: I'll look to find the good place to present me to another members of Elive community, because I read the forum since some days but I think I doesn't find a "Presente yourself" forum.

About btrfs, there's just a thing to survey: the inode part of it can take some place after a while...

Yes, I know, first thing I must do is to make her test in live mode, she has her habitudes and she doesn't like changes too.... First battle I won was some years ago introducing her to Linux, nowadays she works almos 90% of her time with Debian 9 and 10% of her time with Win7.

I'm sure that the day she tested Elive some time in live mode she will asked me for install it in her PC. Even maybe she would run Win7 in a virtual machine.... why not?

It's a pity that all my laptops are 32bit ones,

I was surprised to discover that most of these "new netbooks" simply cannot boot the 64bit version of Elive, I know that they has low-end hardware and cheap cpu's, but seriously they are and limited to 32bits?

All of them included :), at the moment: gimp, darktable, inkscape, luminance hdr (not sure if this one is really useful to include, feedbacks please?

), and rawtherapee, mypaint is not included right now since looks like gimp can replace it (actually the packages has a problem trying installing it, maybe its fixed for the release of debian buster, sorry @triantares, btw tell me if gimp replaces correctly mypaint on these new versions)

About btrfs, there's just a thing to survey: the inode part of it can take some place after a while...

can you describe? you mean that the filesystem grows in size over time? is there any fix for that or maintenance command to include (btrfsmaintenance with custom options is included for elive), note that every version of btrfs can be improved in every kernel version

Install is ready and working too

I'm sure that the day she tested Elive some time in live mode she will asked me for install it in her PC. Even maybe she would run Win7 in a virtual machine.... why not?

About Win, maybe with the new versions of Wine you don't even need to run the apps in virtual machines, but directly on the Elive system!

About btrfs, I can't tell that much, but it concerned by this part: btrfs-balance... So should be in btrfs maintenance... Just perhaps need an automated default function for the average user...
I heard some users on SailfishOS had problems with that (but on limited stock memory phones)... On those phones it can making it not start, just due to over memory, but could be prevent with minimal maintenance or repaired with some limited knowledge...