Hello everybody,
I just installed the latest beta of elive (3.8.27) on a Mac mini 5,1 from 2011 with 2.3GHz and 8GB of Ram. USB pendrive did not work, because the machine just refuses to recognize them (tried 2 different ones). So I had to use a USB DVD drive. I picked the older Linux Kernel for installation, because I do not have any latest hardware, and everything went smoothly and very well.
So far I have not discovered anything that must be called a bug. The E16 environment is a bit unsual, but there is a manual available which did answer my questions so far.
For curiosity's sake I copied everything from my actual production system (Linux Mint) over to the Mac and installed my most important programs, if necessary. I had to adapt a couple of minor things like my .conkyrc file or my aliases for instance, but otherwise everything felt like I was on my Linux Mint box.
Furthermore the system boots very fast, even with a couple of startup applications, and is very responsive. I could almost (if I did not already have a working and well set up system) switch computers now and replace my more recent machine with the Mac! Great job! Thank you so much for this great distro and keep up the good work. I will keep having an eye on the progress of Elive and will certainly recommend it to others - it's worth it.

Did you know that you can simply 'transgrade' an existing Mint or Ubuntu to Elive, using the live iso?
I did a write up on it a while ago:

) my wife's aging Thinkpad X200T work laptop from Ubuntu to Elive. This wasn't because I so badly wanted to but because Ubuntu was having serious speed issues compared to my Elive machines. So I happily complied to the request.

Transgrading itself was a pain-free experience with all the right questions asked and all the needed warnings. Once installed I went about to change the looks a bit to be a bit more compliant …

No, I didn't know that. Very handy indeed. I won't do it to my Mint machine now, since it works very well and there are no speed issues at all. But I will keep it in mind for future manipulations of other people's computers, should they happen to have some other distro installed.
Thanks a lot for this hint!

BTW the updated version 3.8.27+ (first build based on bullseye) includes a few improvements for Mac's, just like updated kernel and software, and a refind installation

If I installed from Live DVD, I probably still have the Buster-based version, right? If it is like that: so far I only have detected one mildly annoying thing: new windows (if some others are already open) always appear at the very bottom of the screen, and you have to move them to the center manually and then change the window settings. Otherwise everything I do on that Mac works out of the box, and if I did not already have another Linux box for production, I could just switch to the Mac instead. I can only say: Bravo!

There's the other option of switching your running Buster base to Bullseye yourself.
Here's the howto:

As part of getting ready for future developments, Elive has already set up repositories to allow a switch to Debian 11 Bullseye. All existing Elive installations as well as the live version still use Debian 10 Buster as its base and will continue to do so until the shift is considered stable and foolproof. Enabling people to decide for themselves whether they want to try out and test this imminent shift, here's a small Howto explaining the steps I took to get there. Upgrade steps: Make su…

always appear at the very bottom of the screen, and you have to move them to the center manually and then change the window settings.

windows are "smart placed" by default (starts on top-left corner, and then shifts in every new window opened on the same desktop), if you want to change this behaviour you can do it in the E settings, where Placement: 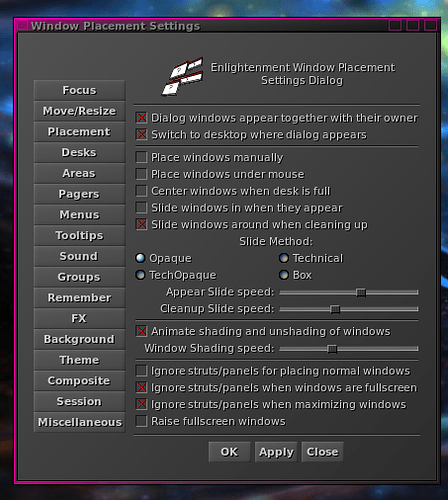 Thank you! Played around with the settings and found a working solution for myself.

And another thing: could you give me a translator's account, please? You have already offered it to me.... Thank you.

yes, send me an email to Thanatermesis at gmail with a wished username and password to use