Is there a post somewhere showing how to install E24 to Test on my production system "without messing up" my systems ?

I "suppose" once e24 installed, it's as simple as choosing E24 when logging in ?

The method would be "api enlightenment" after which you will have the extra "enlightenment" option(s) on the login screen to log into.
Your E16 will be accessible as always and wont be affected.... So your workflow shouldn't suffer.
As to the version E22 -> E23: Apparently the version is kept to the latest version available in the repo's, so could [will] change to E24 too. 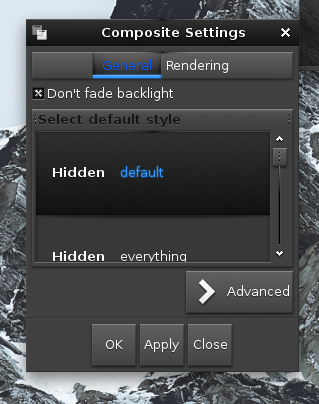 Tks a lot @triantares for those detailed information... You're a real gentleman

Give me a day or two and I'll put up the Elive version of the default theme.

You can import E19 themes (.edj files) from DeviantArt too if you want to.
They will work (there's a failsafe that falls back on default settings where it doesn't). It's a lot of work to port them to E23 so I'm not sure I will be modding any of those on short notice, though.

Ya, now you turn...
But we will not forget your corpse on the stairway to digital heaven

Yes E23 is very cool, unfortunately it has many bugs... playing with confs makes it easly to crash

We cannot include E23 in Elive as default desktop -yet- while we have such unstability on the desktop, but to have them fixed, first we need to report all the bugs that we found to the E developers:

I have already reported a few ones that I have found, but as said, we cannot use it until its buggy

Installed E23 on Elive 3.7.16 . aesthetics look nice but still difficult to get around.
For Example I cannot find my Windows partition. How do i force it to show the partition all the time like in E16?

The included file manager is total shit.
Solution (for now):

The included file manager is total shit.
Solution (for now):

Seriously , that is not just a bug.That's a whole *wild animal!
Thanks triantares, Thunar felt refreshing.

As an old Enlightenment fan I enjoy testing various E releases.
My last but not least tests:

Both on a very old Sony Vaio laptop, 3 Gb RAM.
I like both, also if Elive is too nice to see and work with, and E23 has many .deb to be installed before building efl, e and terminology, and I think that to find all these .deb you have to try by yourself (I found at least 5 or 6 .deb not listed in official web site).

and E23 has many .deb to be installed before building efl, e and terminology, and I think that to find all these .deb you have to try by yourself (I found at least 5 or 6 .deb not listed in official web site).

That is because you installed E23 on Ubuntu .... I agree that IS a dependency hell mostly due to Ubuntu itself but:

Any which way, Elive is the way to go for Enlightenment (any version) where Ubuntu is Gnome centric.

Elive is too nice to see and work with

That is a surprise

What version of Enlightenment are you refering too, E16 or E17?

Personally I find E16 on Elive Beta a very nice and minimal Desktop that stays out of the way at work.

I installed E23 on Ubuntu because I need to work with Ubuntu (I'm working on mini-Openstack experiments) but I tried E also on Debian,Fedora and so on, just to see differencies

Imho LMDE is the distro with less "dependency-problems" building E23 (I mean meson+ninja build).
And about Elive, I use E16

Imho LMDE is the distro with less "dependency-problems" building E23

On Ubuntu, yes ... a lot of the Gnome centric deps are already resolved same as on Elive most E stuff is already installed and made to fit. You'll be surprised at how well E23 runs on Elive compared to the others.

On Elive, Enlightenment is kept up to date with latest E possible (for testing/dev purposes) so will become E24 or higher after a while. It certainly is not stable enough to use as a work-horse but E16 definitely is.
I'd almost call E16 unbreakable, in that I've never had it stall or freeze and make me lose data...and I do customize it to the hilt.

As to working on Openstack:
How does a cloud centric application relate to a local desktop in it's development/testing ??

I'd be interested to find out why you need Ubuntu for that. From what I see doing "apse openstack",
in Elive/Buster Openstack simply can be installed from repo.

Thank you for your suggestions about Elive

Is there a particular reason you need microstack/juju for that?

If it's about rendering those older laptops useful methinks that Elive is the better way.

As always, it depends what you want to do with them.

From what I understand "juju" tries to put some hardware stuff in the cloud but that goes past the fact that currently most machines have plenty of power and disk space cheaply whereas available RAM isn't infinite.....and that is exactly what Ubuntu uses up a lot, just to be up and running.

Of course you could opt for an older version of Ubuntu (one that was made in the days your target machine was built) but then Canonical does not support it anymore ....... Debian will, as will Elive.

I have also an old Acer notebook with Elive Stable, and it works very, very well

About juju, I need to test it because at work we have a very big project using Openstack by Canonical, so I'd like at least to make some stuff by myself just using 'poor' laptops.

And beeing an Enlightenment fan since 2001, I tried various tastes like OpenGEU, Bodhi and others, finally using only Elive or E23.

so I'd like at least to make some stuff by myself just using 'poor' laptops.

There's also a PuppyLinux variation based on Ubuntu ...... Both should have a fairly smaller footprint then vanilla Ubuntu.

Would a "cluster" of Raspberry Pi s maybe make sense? They're dirt cheap after all.