Run applications from any other operating system (in your Elive)

You can run applications from any other operating system from your Elive system using one of the two explained methods. This is sometimes needed when we need to run applications that requires a specific version of glibc, or from a different architecture like 64bit, or that the application requires a very specific system of Linux like if you would like to run the Tizen SDK.

Setting up a Virtual Box machine, you can run other operating systems (we will reference ‘Windows’ for this example) with these amazing features & tips:

But there’s a much more powerful way to run applications without any of the previous listed cons, the only limitation is that it needs to be a linux* operating system

In short, you will have the full system copied to a directory and you will chroot it (to enter on the system) and then run anything from it

Create or copy the full system to a wanted directory to use, you need to do it from root in order to maintain the correct permissions and owners (you can use cp -a)

Another option is to just ‘enter’ on an existing one, let’s say that you have mounted an ubuntu partition, so from a terminal you can run something like this:

Your prompt then will appear like the ubuntu one, because you are inside that system, type “su youruser” to change to another user or press “Ctrl + d” or type “exit” to end the session

You can copy an already existing system but you can also create one in a very simple way using debootstrap, like for example:

This will create a last-last version of Debian in a directory called sid, please refer to any debootstrap debian howto / documentation for a more specific howto

Most of applications are a bit more complex, in the sense that they requires /dev (hardware devices) access, or /proc access, or /sys, or even dbus and similar things, sometimes they even needs daemons to be running

For that, you need to do a few things like mounting some directories like the /dev one with some special settings like --bind which is like a shared way to mount a directory inside another, unfortunately there’s other commands needed and other administrative tricks to make the system correctly compatible and it is not easy to find a complete howto on internet that lists all the commands needed.

But the good news is that, like always, Elive does it all already for you, so it has already a tool that includes all the needed things, like: dbus support, can run graphical applications, network compatibility, disabled unneeded daemons / triggers, etc. Run it without commands to see all the options and features:

On my example I have used the live mode of Elive to run things from an installed Elive system on ‘sda1’, but let’s say you want to run a last version of libreoffice that is installed on a system, or in a debootstrapped directory of a last version of Debian. 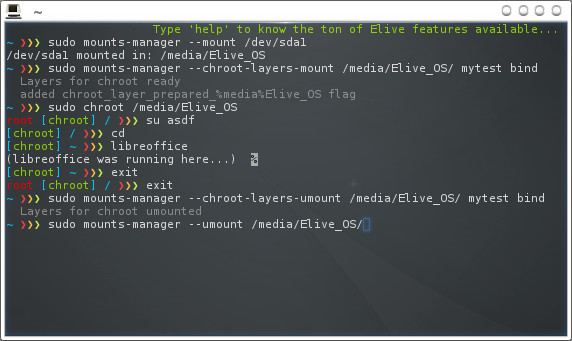 (libreoffice latest release works perfectly within elive!)
I like this tutorial, i was looking for such a solution! My laptop is kinda unerpowered so i would have never been able to run a vm! I will try it as soon as possible, thanks a lot!

alright @stoppy98, that solution consumes just 0% of resources (except the ones that are used to run the application itself)

and they are run at 100% efficiency

If you try it and see something to fix / improve in the howto, just edit it!